For this weeks #CheckOutThatView I am sharing a photo of Southampton Docks, which I took from my balcony on board the Norwegian Escape in October during its inaugural cruise launch. This is currently the newest cruise ship on the ocean and is the biggest in the Norwegian Cruise Lines fleet. I was very lucky to have a cabin on the 16th floor, meaning I had spectacular views. Whilst we only sailed from Southampton, around the English channel and back again, we had a thoroughly wonderful time on board and it’s definitely given me a taste for cruising (review will be coming soon). I had actually been on Royal Caribbean’s quantum class ship Anthem of the Seas just the day before, so now I am desperate to go on a full length cruise to somewhere hot. Anthem of the Seas had been the worlds newest cruise ship until Norwegian Escape launched and I had literally hopped off one and onto the other. It was fantastic. The two ships were so remarkably different too!

This is the view of Southampton Docks when we checked into our stateroom. Blue sky, sunshine and surrounded by water… who’d have thought this was a British day in October?! 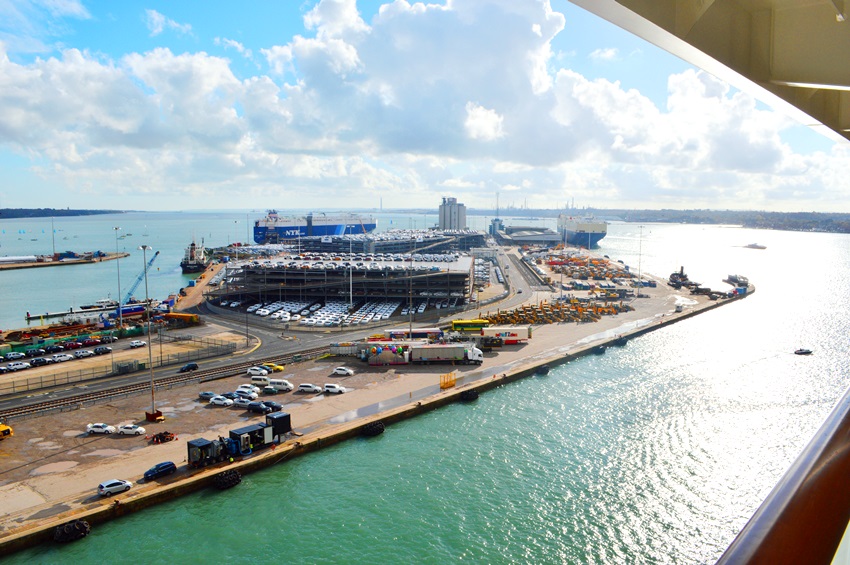 I must apologise for the few weeks where there was no #CheckOutThatView post. My daughter was struck down with illness, then I was, and then my WiFi got disconnected for a few weeks. Now the chaos has died down, I can assure you these posts will be going back to being weekly again!

Thanks to those of you who linked up to the last #CheckOutThatView and I must give a mention to Coombe Mill as my fave pic of that linky. Her sunset in Plymouth photo was absolutely incredible. here is this weeks linky. Please do make sure you are commenting on at least two other posts as this is what makes the linky work.