To break up the journey, on our family road trip across Spain, we stopped overnight at the Diagonal Plaza Hotel in Zaragoza. Zaragoza is the capital of Spain’s Aragon region and is famous for it’s landmarks, the Basilica of Our Lady of the Pillar and the Puenta De Piedra Bridge over the Ebro River. Whilst I wish we’d had time to explore the reportedly beautiful Spanish City, Zaragoza was just a rest stop for us, so we didn’t have the opportunity to see these sights. It had taken us three and a half hours, with traffic and service stops, to drive from Santander to Zaragoza. I imagine if we hadn’t gotten caught in both port traffic and rush hour traffic in Santander, the journey would have been quicker. 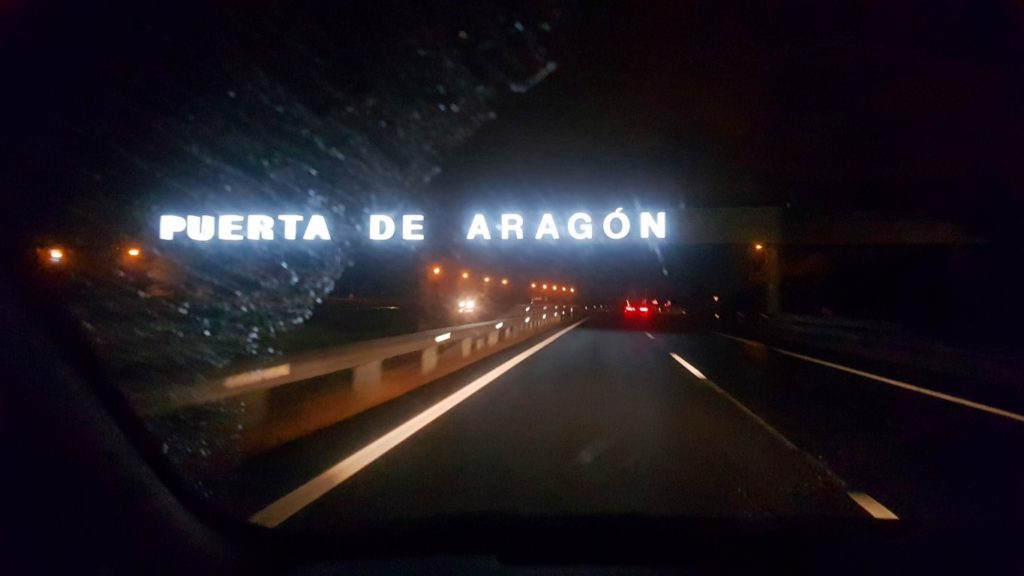 The Diagonal Plaza Hotel is actually on a business park, on the outskirts of Zaragoza, so don’t expect a pretty riverside view, as you won’t get that. We had specific reasons for booking this hotel.

The Diagonal Plaza was perfect for our needs and whilst it’s not a “touristy hotel”, it was what we were looking for.

It’s also only ten minutes from the main town of Zaragoza and just five minutes away from Zaragoza airport. 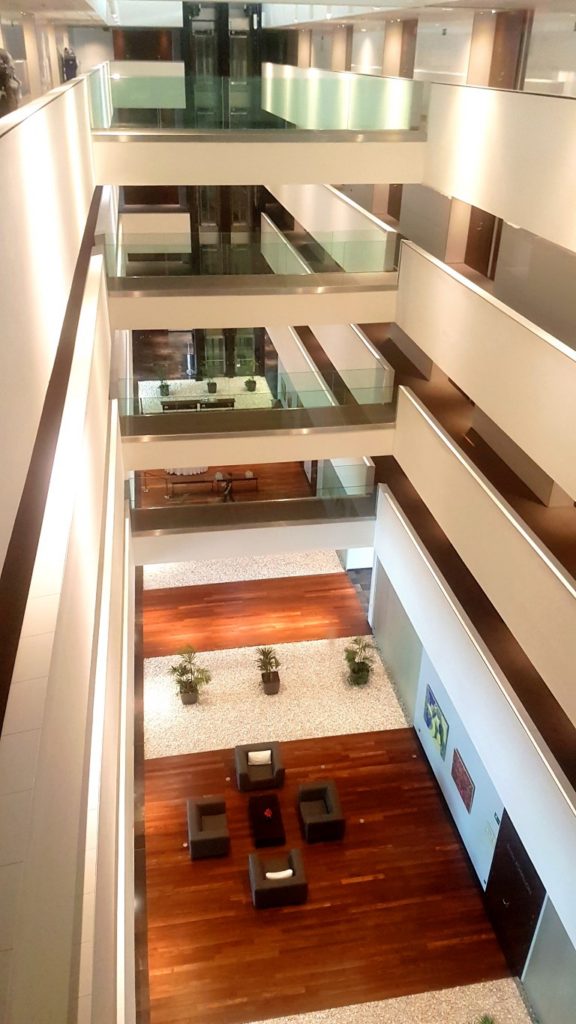 When I looked on the website at the fivefold room, it wasn’t immediately clear, whether or not we could have five and a baby in the room, or if five was the absolute maximum. So I emailed them to check. I received a speedy reply (in English), welcoming the six of us to stay in the one room. When I went on to book, a few minutes later, a button had been added to the booking form. Where you select the room capacity, there was now a little checkbox which said “+ a baby”. I am adamant that that checkbox was not there before and am seriously impressed that this was immediately implemented after my email to them.

Booking was quick and easy and the website is translated into four different langauges. We paid 136 EUROS for 2 adults, 3 children and a baby for one night’s stay in August, including breakfast for all of us. Although we had brought our own travel cot with us, the hotel provided one already made up and it had a thick well-padded and very clean mattress in it, so we used theirs instead of ours.

There is free parking directly outside the Diagonal Plaza Hotel, which made it easy for us lugging all our stuff in late at night. There is also a secure park available for a charge, for those who want added security. Check-in was smooth and easy, with staff speaking excellent English. As you step through the doors, you see just how huge the hotel is, with it’s white walls and glass panels. The lobby is furnished with plants, pictures and a few comfy chairs to make it look more inviting and less stark. Lifts service every floor, making all the rooms in the hotel accessible.

Our bedroom was very big (much bigger than it looks in my photographs). I was worried it’d be cramped with five beds and a cot, but it really wasn’t and my photos don’t do it justice at all (particularly as it was dark when I took them). There was room to walk around every bed and a little living room with a sofa and armchairs too. Décor was very plain and basic, but it’s worth remembering this hotel is mostly used by businessmen and women. More importantly, everything was immaculately clean. 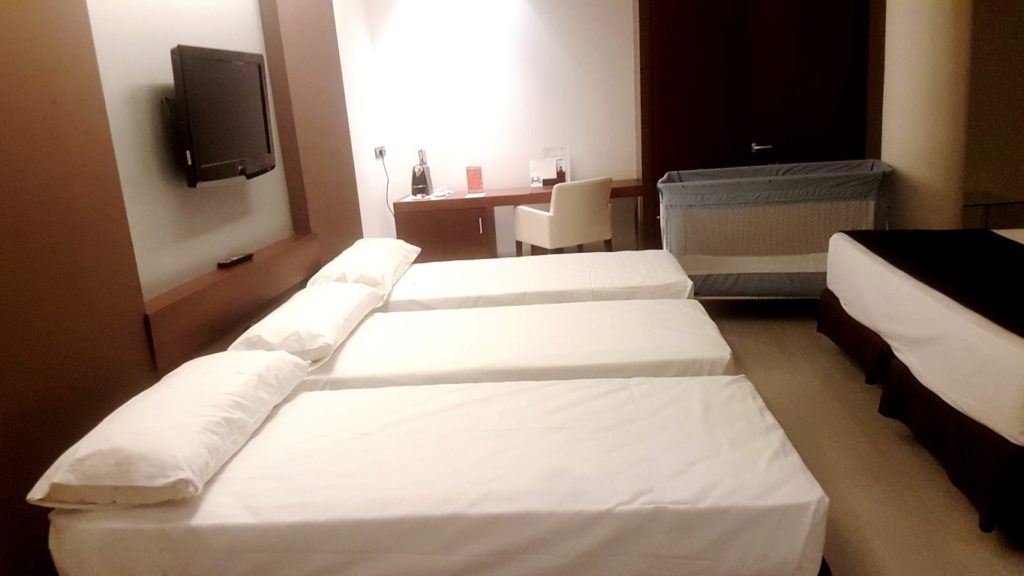 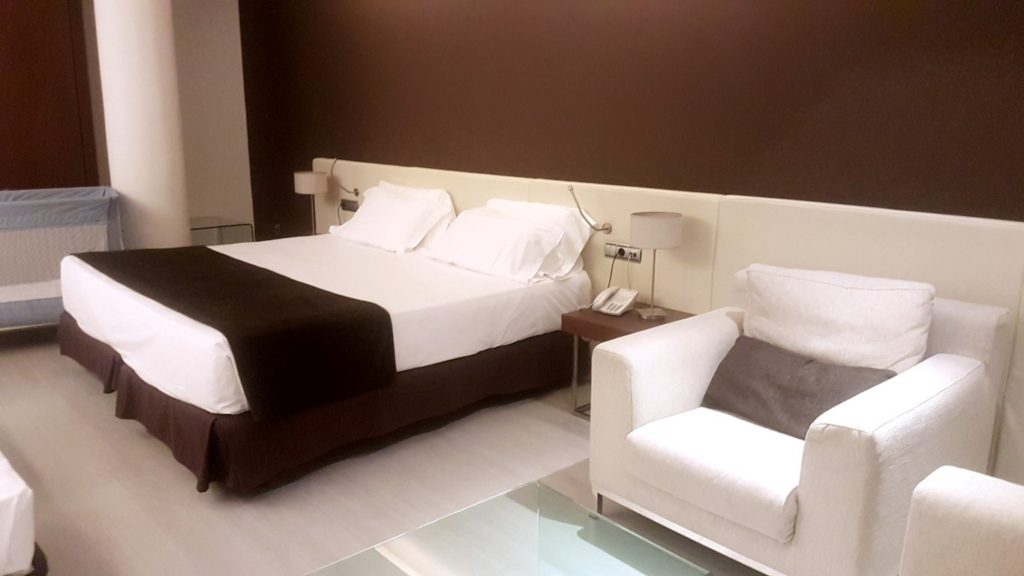 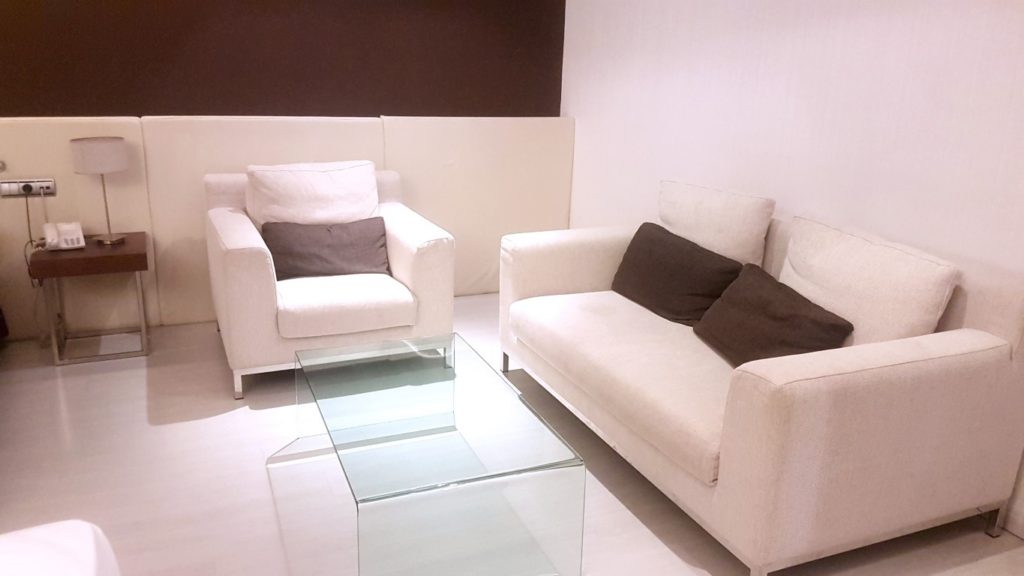 The bathroom was also spacious, with “his and her” sinks in one room, and a shower easily big enough for two in a separate room. The shower, was quite possibly the best shower I’ve ever had. With numerous different shower heads, spraying in every direction (but individually controllable if you don’t want to use them all) and each jet was powerful too. The complimentary toiletries on offer included toothbrushes and toothpaste, razor and shaving gel, shower cap and all the usual shampoo, shower gel etc. This was very handy as we had forgotten to bring a razor with us and one toothbrush had been left in the car. 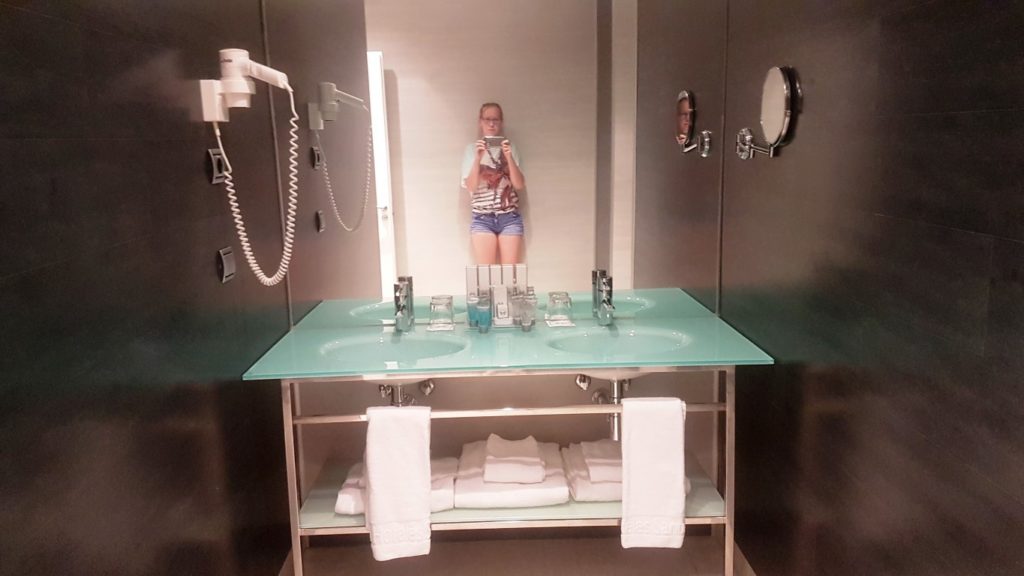 The downside of the room for me, was that there was an espresso machine, but no kettle, so it was near impossible for us to sterilise baby bottles or have a cup of tea. We made full use of the minibar instead, which stocked a variety of soft drinks at very inexpensive prices. Of course it had alcohol too, but my husband and I aren’t really drinkers. My husbands essential needs were met too, with a powerful hairdryer, iron and ironing board all in the room. 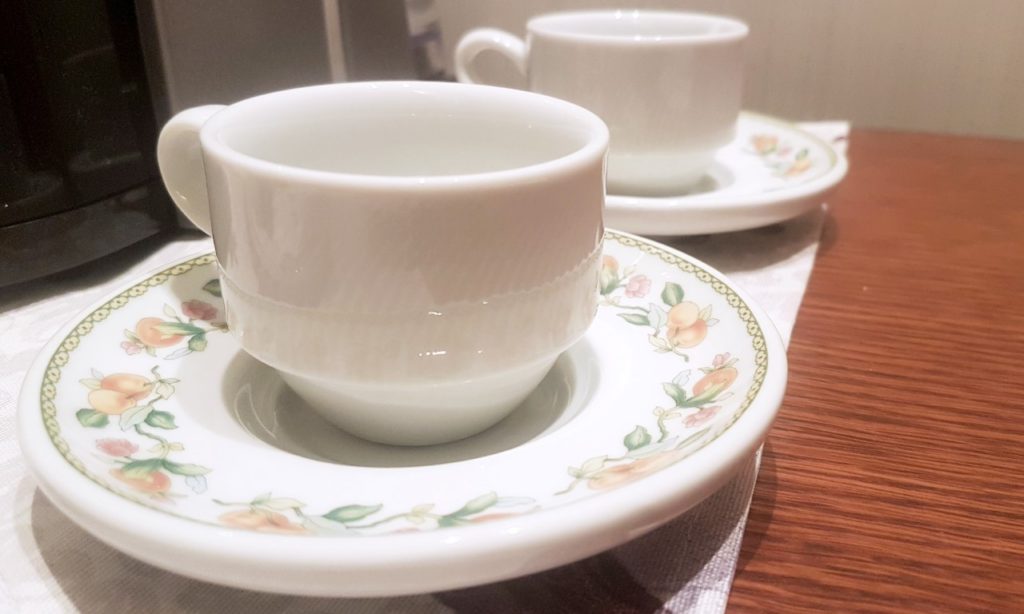 The beds were clean and extremely comfortable and a variety of lighting options in the room, meant the children could get to sleep quickly and we could stay up for a bit and watch tele. We all slept like babies and the curtains completely blocked the light out so we all got a lay-in too.

The dining room was spacious, light and airy, it wasn’t busy as we had taken our time getting up and I think most of the people there on business had already eaten and left. We pretty much had the restaurant to ourselves. 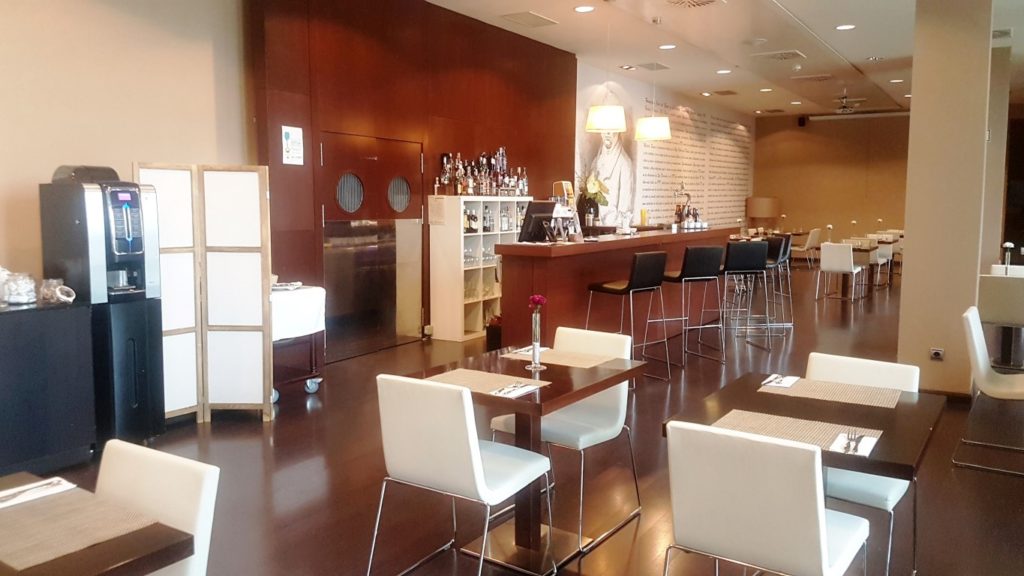 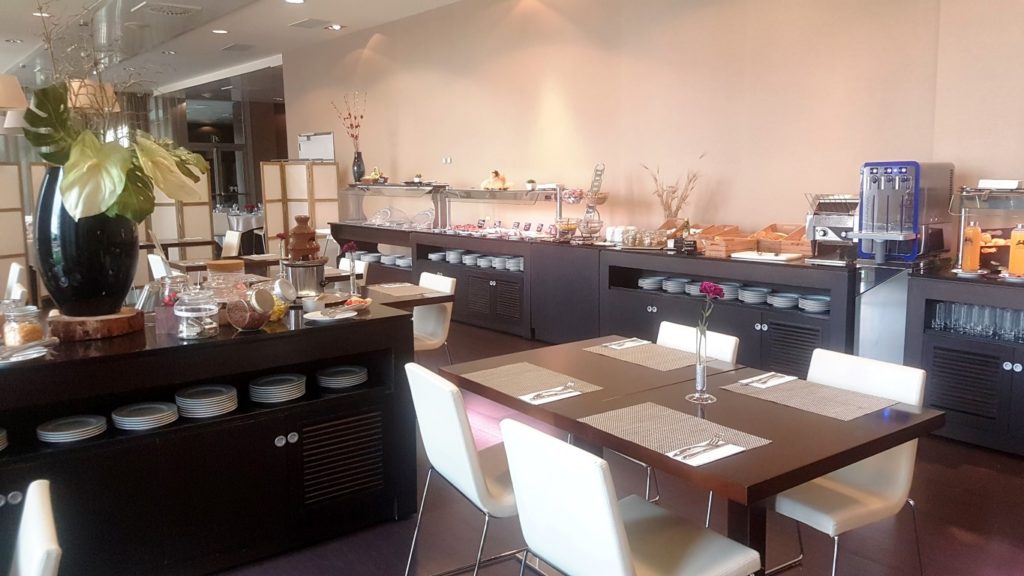 I can’t say much for the hot breakfast offering, as quite honestly, it was dire. I don’t think it’s fair however, to judge a hotel in Spain, on it’s Full English! The continental buffet offering was varied and it seemed there was something for every nationality. A selection of breads, pastries, cereals, cold meats and cheeses adorned the buffet. There was a table of foods for people who are gluten intolerant and this was separate from the rest of the buffet, which I think is extremely considerate for those who need it. 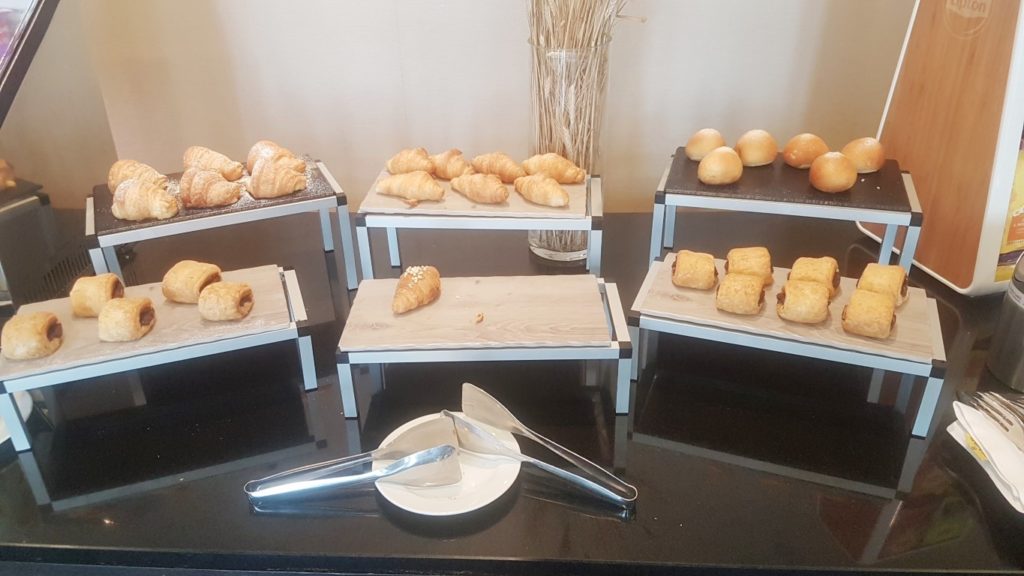 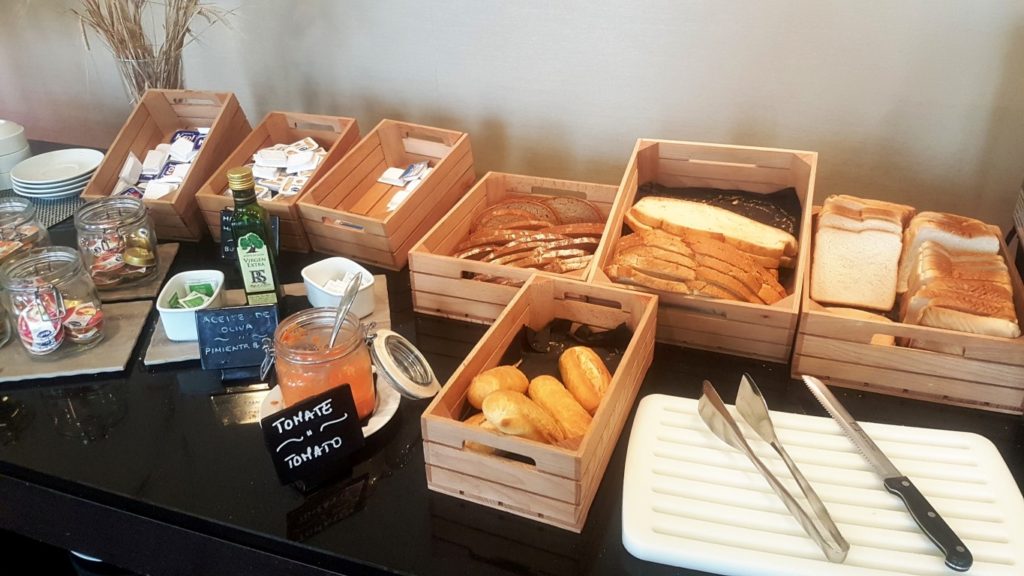 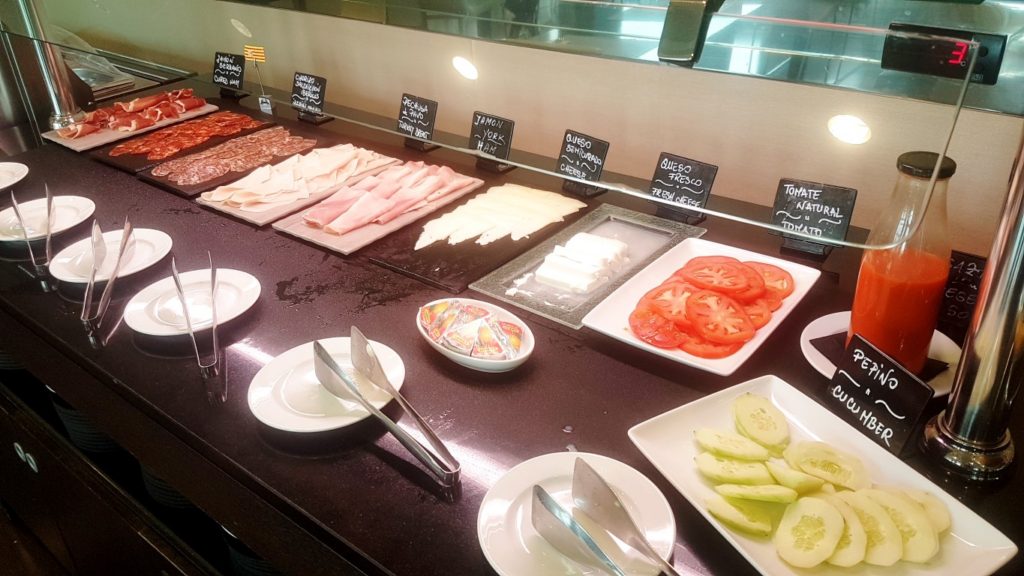 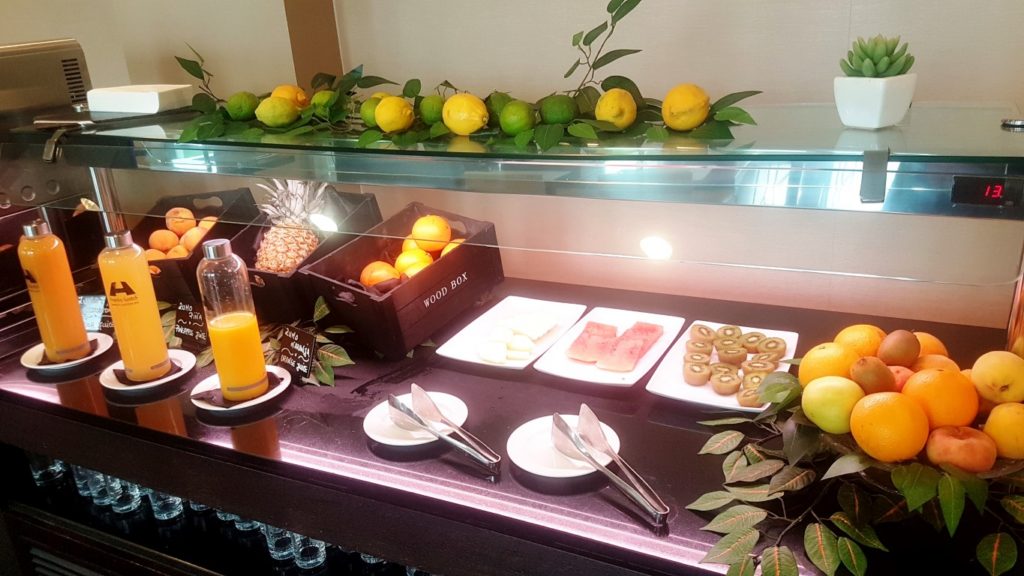 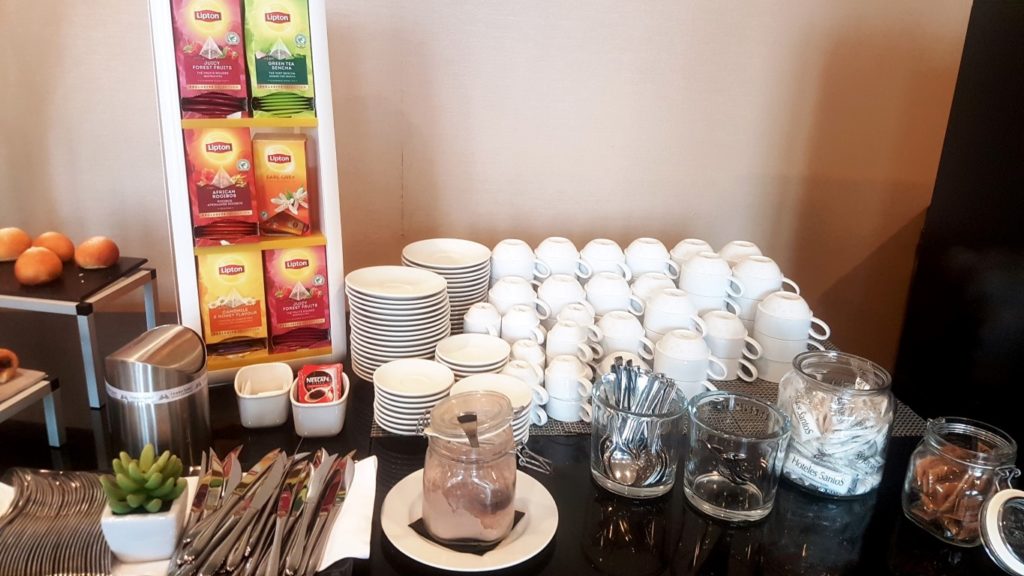 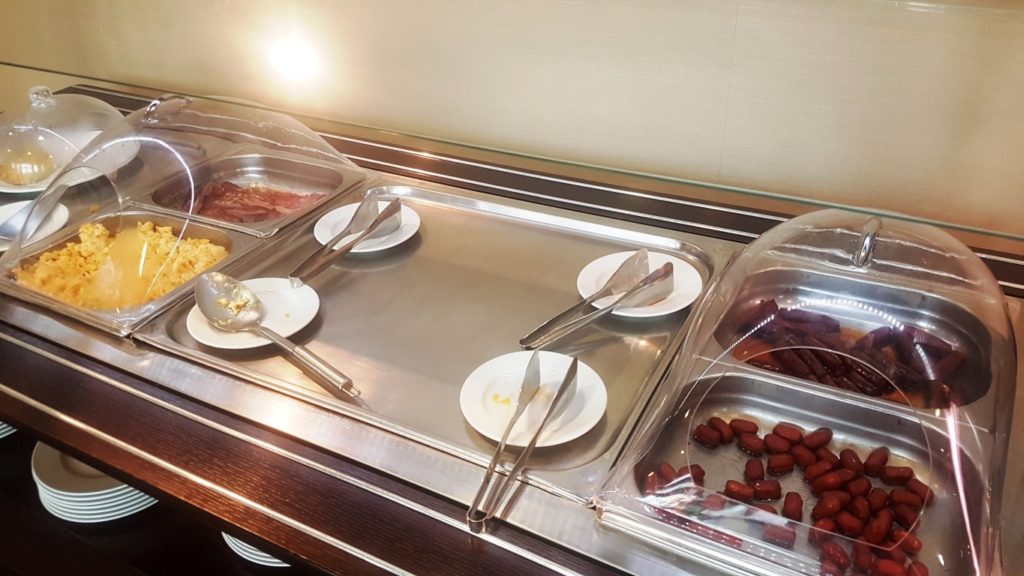 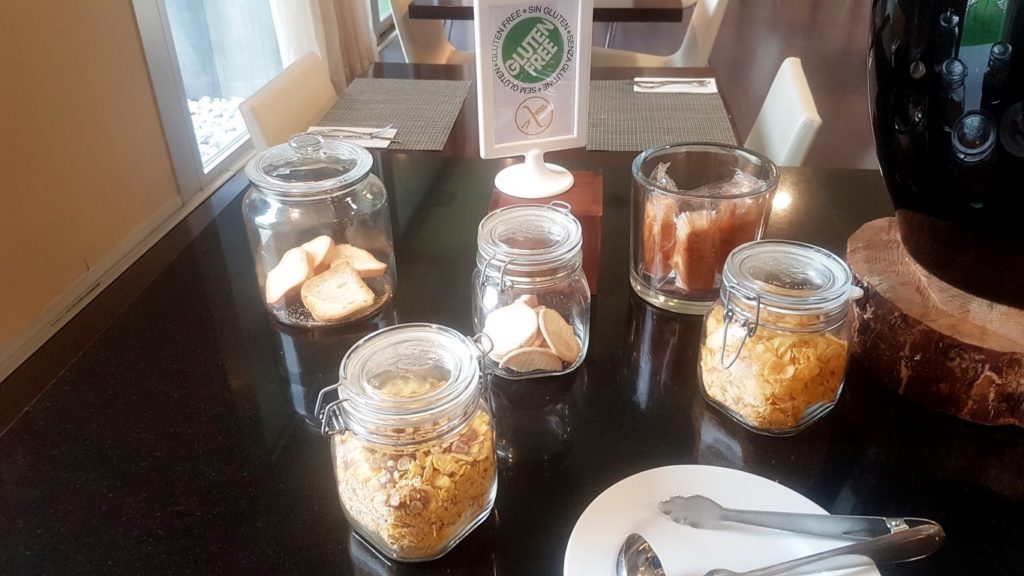 A first for me though, was the children’s buffet table or “Kid’s Corner”, as the hotel called it. Whilst I’m not one for giving my children sweets at breakfast time, it shows the hotels commitment to be child-friendly. As we were on holiday, I allowed the girls to have some of it, once I was satisfied they’d eaten something savoury. They absolutely loved it. 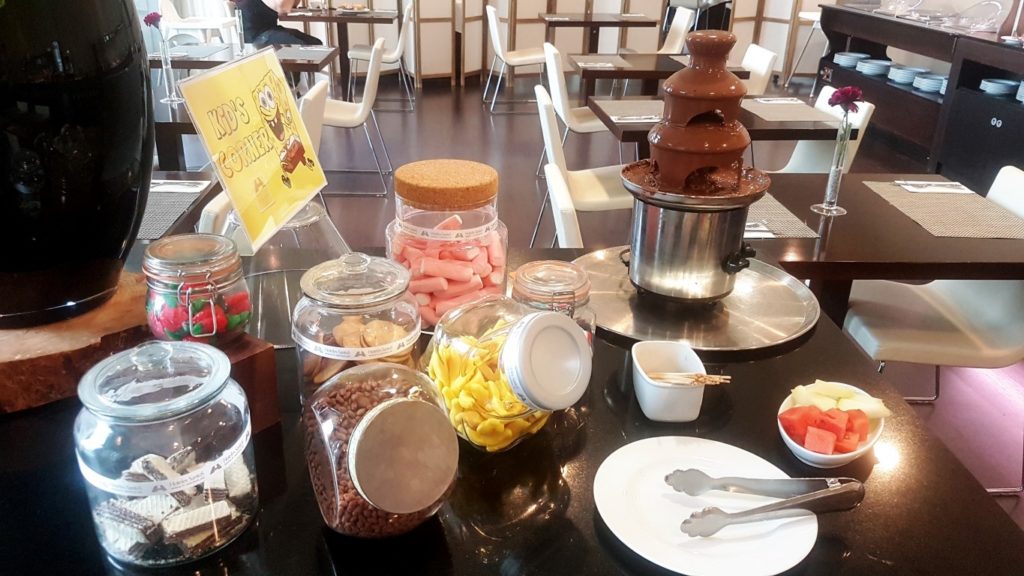 Our thoughts on the Diagonal Plaza Hotel

The Diagonal Plaza Hotel isn’t what I’d call a “WOW hotel” as it doesn’t have a huge amount of character, but it was spacious, extremely clean and had all you’d expect from a four star hotel. Some of the facilities on offer, which we didn’t experience, were the gym, meeting rooms, café and terrace, luggage storage and airport transfer service. On first glance, you wouldn’t expect this predominantly business hotel to be baby friendly or even child friendly, but they were. Highchairs, cots and the children’s buffet were great examples of this and children under 2 stay for free. I’d definitely recommend this hotel to other families travelling through Aragon. I would suggest spending a few hours exploring the town of Zaragoza too, which I regret not doing.