Home
London
Afternoon tea at The Ritz in London 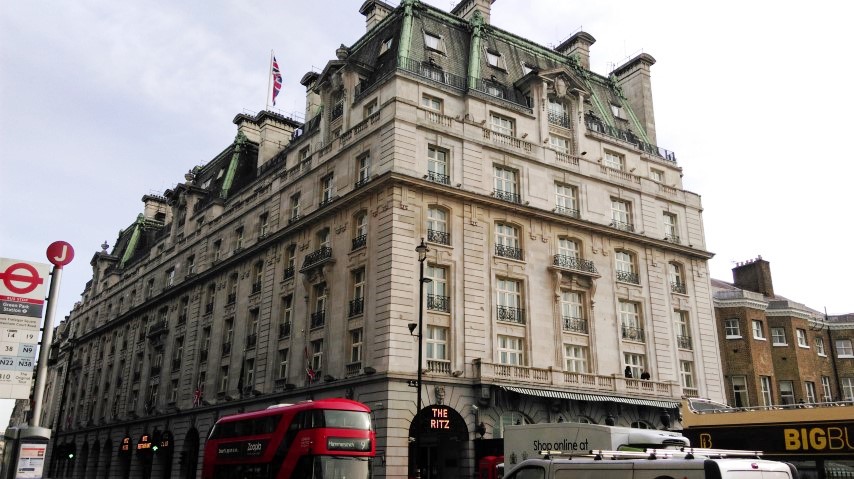 Afternoon tea at The Ritz has been on my 30 before 30 list for a long time and it’s something my mum has always wanted to do too. So for my mum’s birthday this year, I decided that’s what I’d treat her to. We stayed at the lavish Royal Garden Hotel in Kensington, watched Jersey Boys at the theatre (Mum’s treat for my birthday) and after a small breakfast at the hotel, we headed off on the London underground to Green Park, for The Ritz. 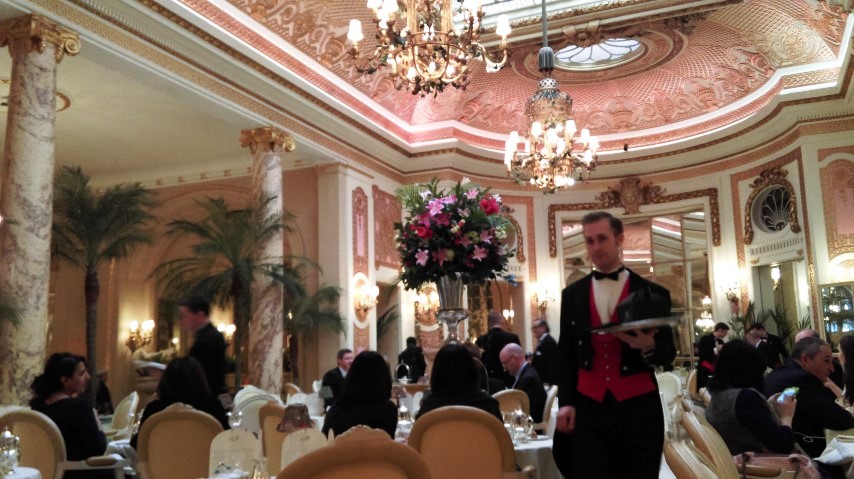 As expected, the experience was one of exceptional service, incredible décor and a very classy atmosphere, from the second we stepped through the doors (which were obviously opened for us, by impeccably dressed doormen). 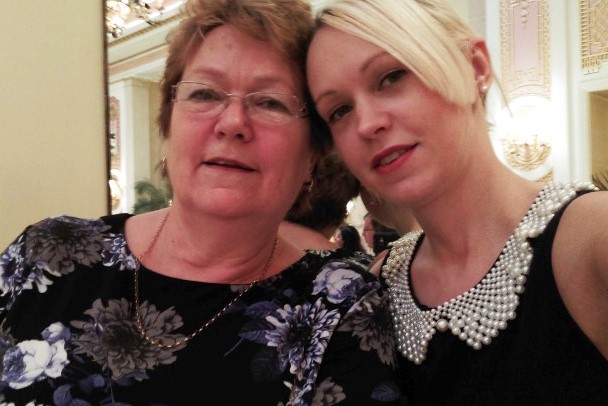 Mum and I went in pretty dresses, as The Ritz has a strict dress code. We had a giggle at a man who had to loan a tie from the cloakroom, as he had entered the building without one. Even the cloakroom “tickets” looked classy. 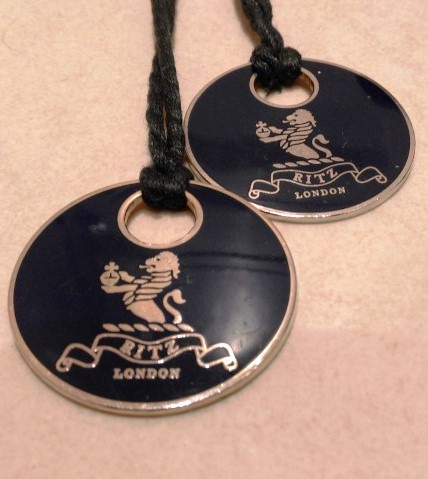 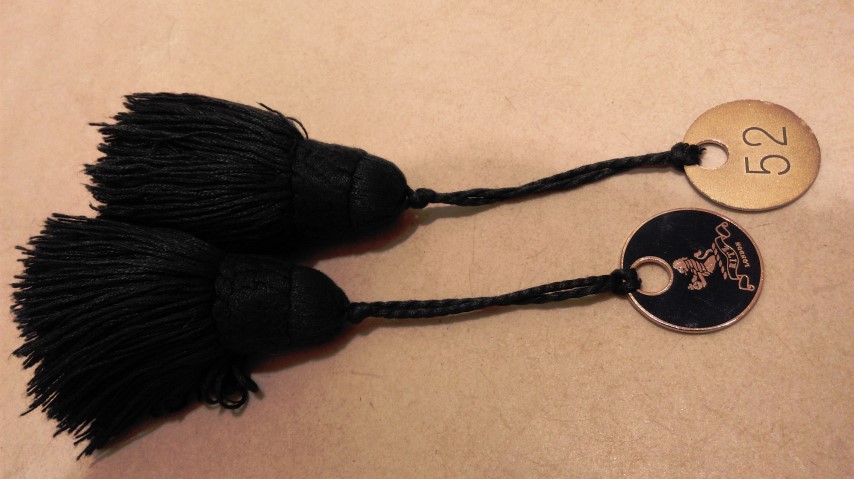 Inside the building, The Ritz was adorned with stunning architecture, rich colours and fresh flowers. The ladies toilets were a pink artistic masterpiece, complete with sofa’s, magazines, fresh bottled water and individual flannel hand towels. 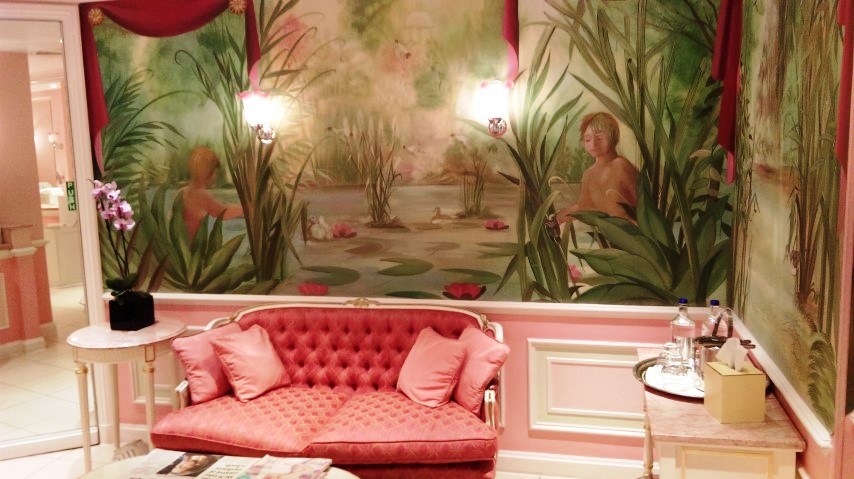 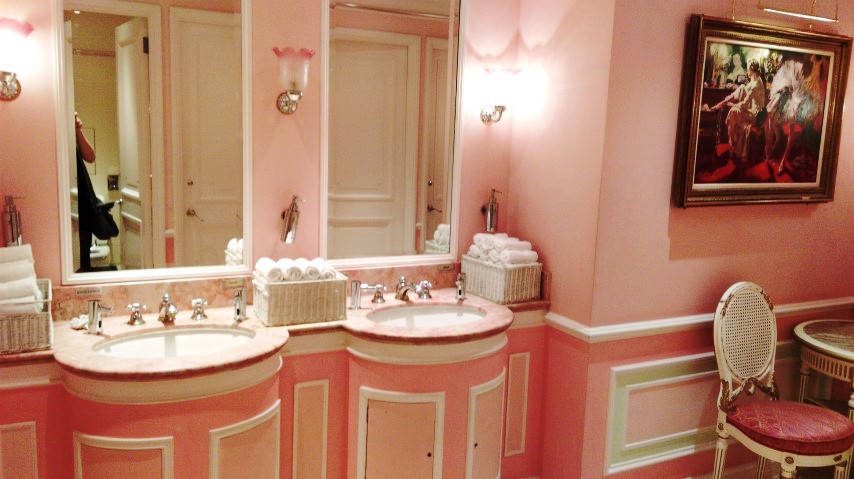 The dining room was laid out beautifully and we were seated on a small bench style seat for two people, at a table lain with white linen and pretty crockery. 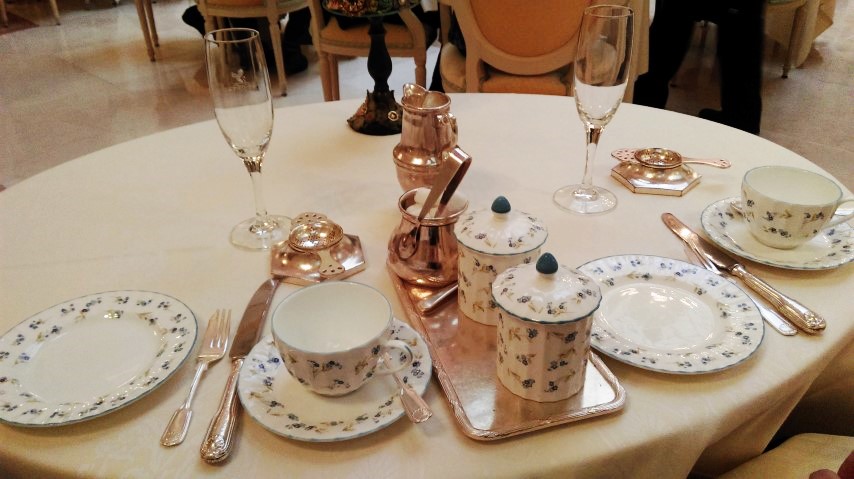 There was no waiting around. We were presented with a tea menu, with a vast selection of teas to choose from. Seeing that we were going to be drinking about a pot of tea each, we both decided to go for caffeine free teas. My Mum chose a fruit tea and I chose the Rooibos tea. This arrived exceptionally quickly, as did the cake stand. 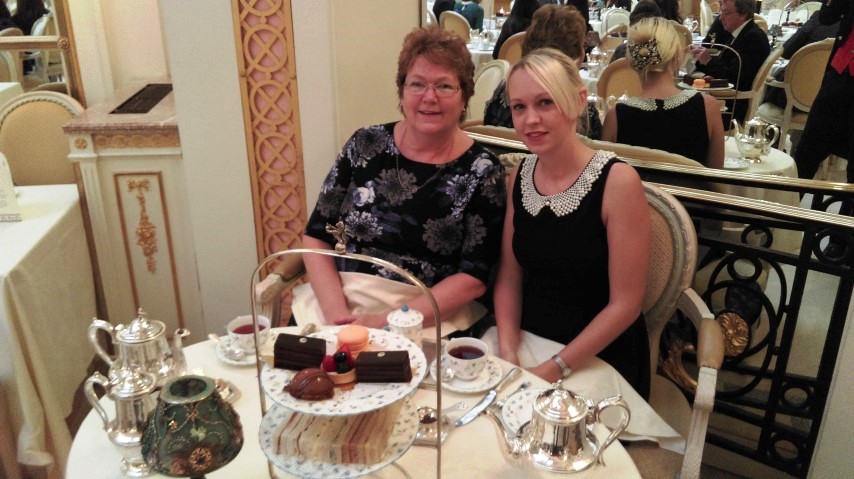 The tea was presented to us in shiny gold tea pots. Traditional tea strainers were placed over our fine china teacups and the tea was poured through the strainer and the strainer set to one side. Everything was done for us. We were not expected to move a muscle, except to lift the tea to our lips and enjoy. I did have to stifle a giggle when we the waiter stood on ceremony for us to give our approval of the tea, before he would retreat, in exactly the way a sommelier would when you were tasting wine. I didn’t mind though, because our waiter was the spitting image of Ryan Gosling. I spent the whole two hours trying not to stare at him and drool. 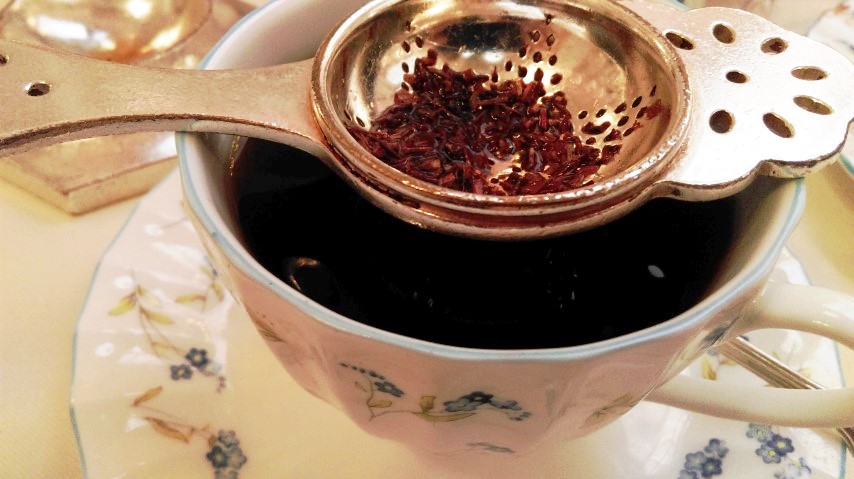 We were glad we had only eaten a small breakfast and timed our afternoon tea for lunchtime, because wow… we were served a lot of very rich food! 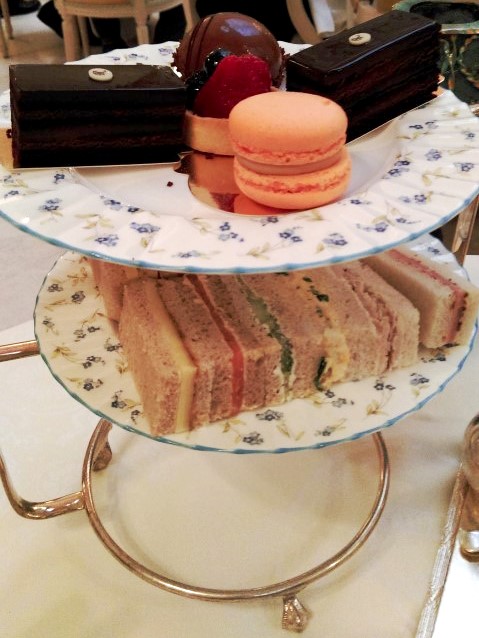 Dainty little finger sandwiches filled the bottom tier of the cake stand. Cucumber and cream cheese, smoked salmon with lemon butter, ham with wholegrain mustard, cheese with chutney, chicken and horseradish, and egg mayonnaise. There was enough for one each of each filling, but no sooner had we gotten half way through them, another plateful arrived. There was more than enough sandwiches for two people, but they were so delicious, we couldn’t waste any. 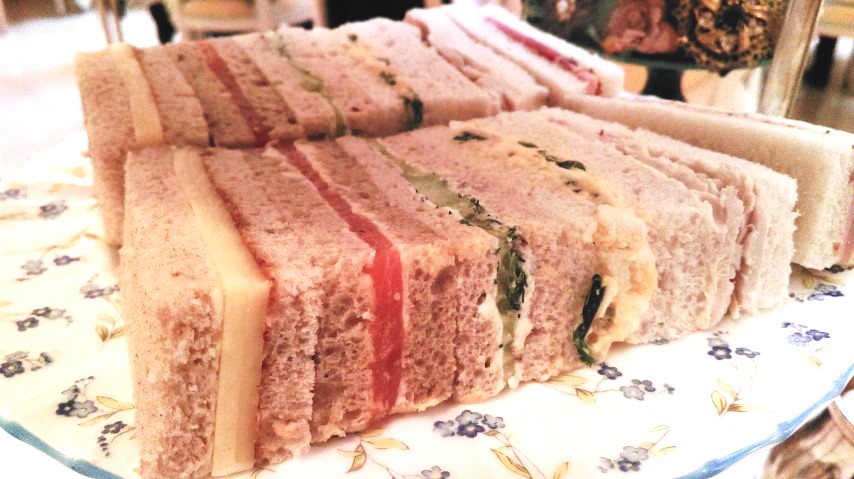 As we finished the sandwiches and politely declined more, the scones arrived, still warm from the oven. Clotted cream and jam was in porcelain lidded bowls in front of us and the scones were truly scrumptious but extremely filling. 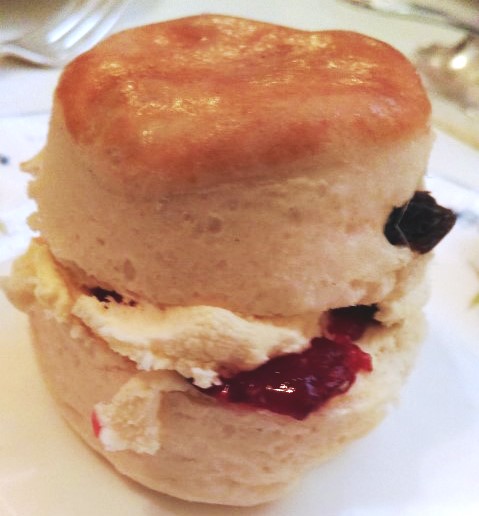 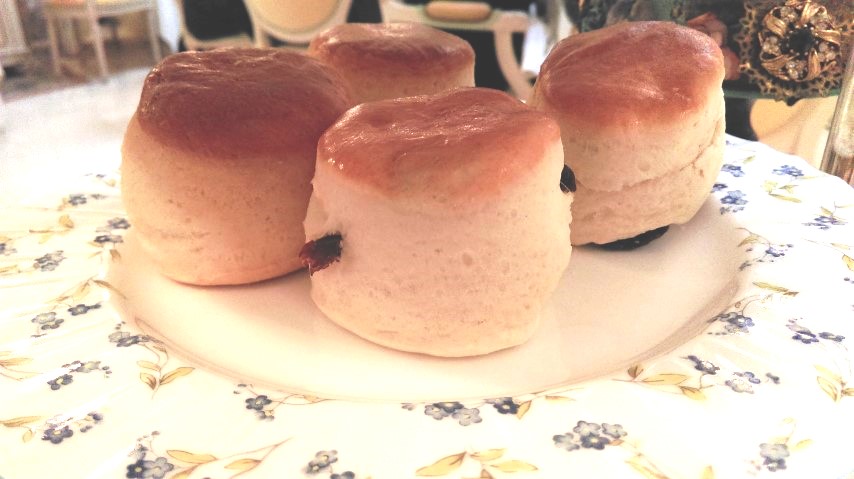 Before we could finish the scones, a waiter came along, bearing a trolley with large and inviting cakes. We were given the choice of which we would like and were given a generous sized portion each. We opted for a coffee and walnut cake, which I swear was the tastiest cake I have ever eaten in my entire life! 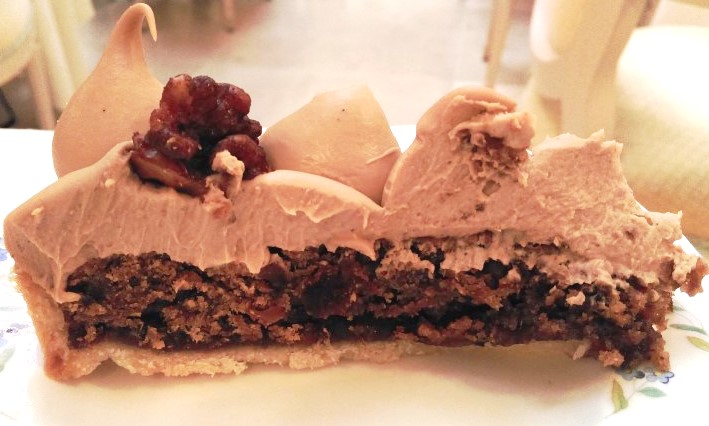 We were full to bursting and I was glad that for the first time ever, I hadn’t put sugar in my tea. My Rooibus was needed more and more as the rich tastes of the cakes were mounting. The waiter was constantly topping up our tea, sometimes we’d only had a sip and he’d top it up again. This is fantastic for people who like their tea piping hot, but it started becoming a running joke for me, because I was trying to let me tea cool a little. Every time it reached the temperature I like, the waiter was topping it up and consequently making it hotter again! 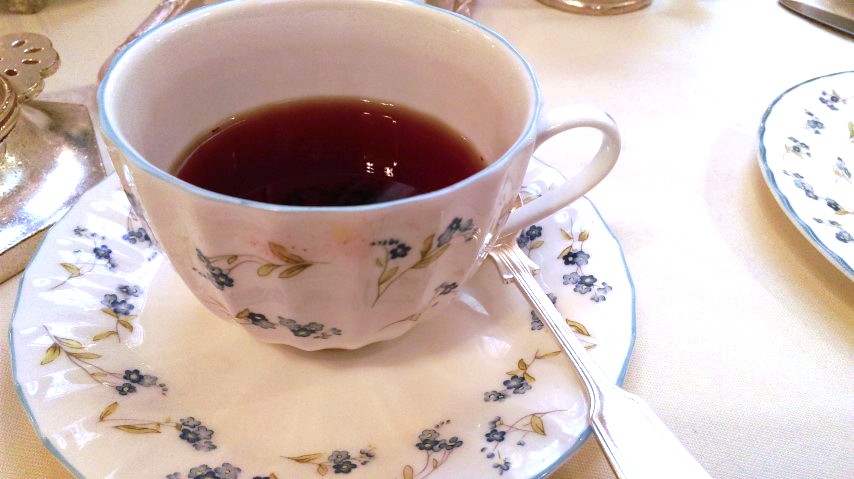 Mouthwatering cakes adorned the top tier of the cake stand, a macaroon, a fruit and custard miniature tart and three divine and sickeningly chocolately cakes. We were really beginning to struggle. Everything tasted so good, but everyone has their limits. 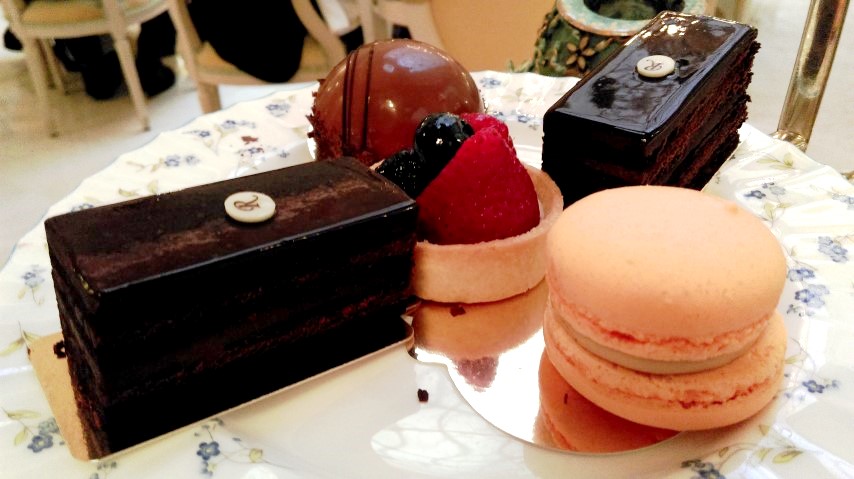 The pianist, who’d been playing elegant up-tempo tunes since we sat down, began to play Happy Birthday. I had mentioned that it was my mothers birthday on our booking form, but I had not upgraded to a celebration cake and they had no idea I was a blogger. So it came as a complete surprise to us, when the waiter headed over to my mum, with a small, but perfect, Happy Birthday cake, with a candle in it. He presented it to her and wished her a happy birthday, as the rest of the room smiled respectfully at my mum. She was blown away. And so was I, because the people on the next table had paid extra to upgrade to a celebration cake and ours looked identical to it, just smaller. 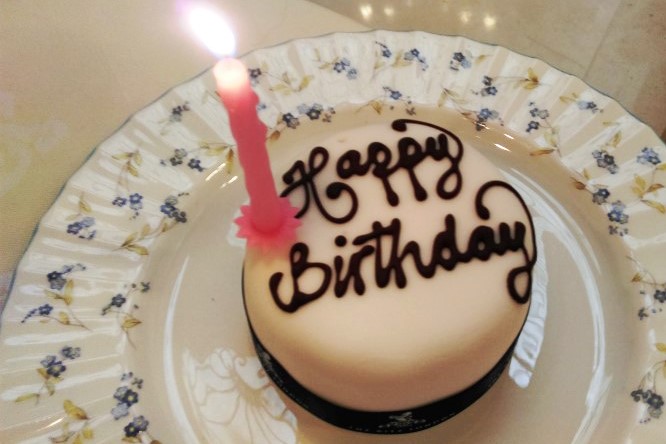 At the end of our timeslot (you are given two hours) I settled the bill at the table, by debit card, whilst they boxed my mum’s birthday cake for her to take home. The Ritz do not allow you to take any of your afternoon tea home with you, so what you can’t eat, you lose, but they do box the birthday cakes. The bill was exactly £100 for the two of us as we had booked the standard afternoon tea, with no additional extras, for £50 per person. We booked directly through The Ritz website, but I hear there are packages available through coach companies for people looking to incorporate their travel and afternoon tea in one. 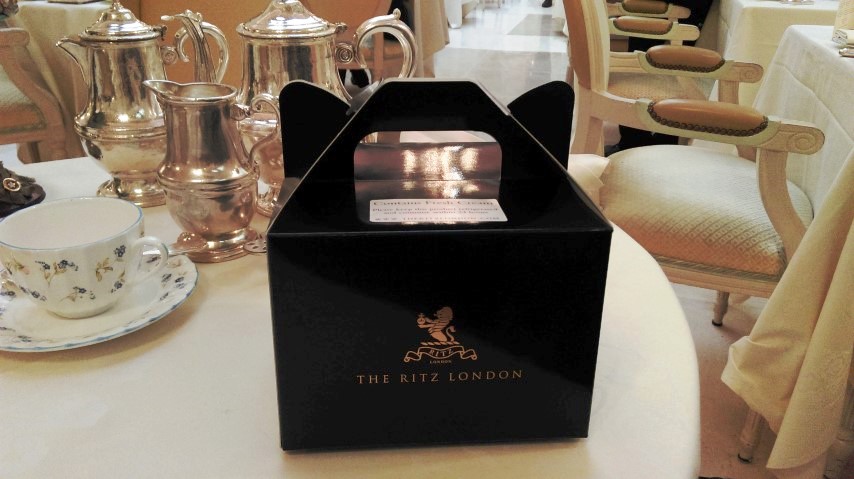 I know that afternoon tea at The Ritz is on the pricey end of the scale, but it was so worth it and I am really glad we went. The service was second to none. The food was second to none. The décor, the class, the way we were treated… the whole experience was fit for a princess and it was so nice to share this special occasion with my mum. I would highly recommend anyone who has always wanted to have afternoon tea at The Ritz, to go ahead and do it. We have great memories from it and it was a lovely mother-daughter bonding time. 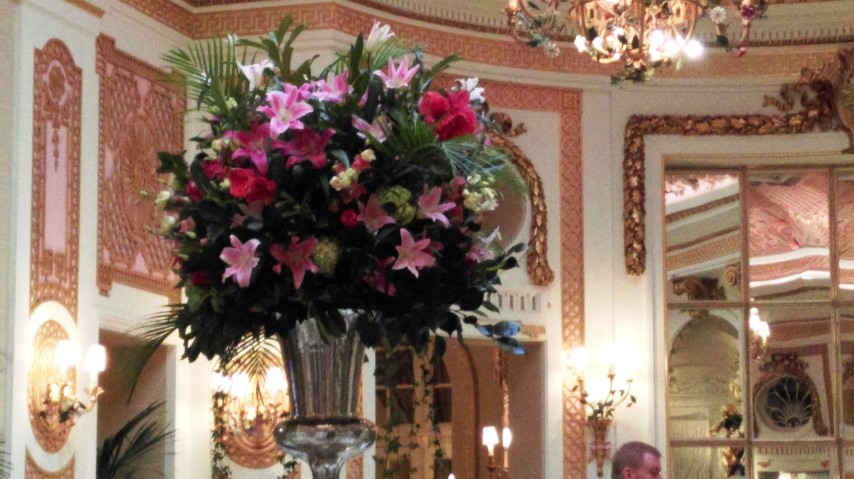