The Great British public has once again collectively chosen the very best beaches in the country, as revealed by Trip Advisor. And if there was ever any real doubt about it, Woolacombe Beach has wiped the floor with the competition to come out as Britain’s Best Beach for 2016 for the second year in a row.

Given the tendency for the weather in the UK to be less than ideal, it’s common to assume that sparkling sands, blue seas and summer sun really only exist elsewhere. In reality however, this couldn’t be further from the case – check out Britain’s most idyllic coastal resorts and you might have to revisit your assumptions!

Along with listing the 25 best beaches in the whole of the United Kingdom, the Daily Mail was kind enough to also feature a helpful map. Not that doing so was really necessary however, as given the near-total concentration of winning beaches in the South West, they might as well have chopped the other 90% of the map off!

Incredibly…though not entirely surprisingly…no less than SIX of the ten best beaches in the country are located in the South West. Woolacombe Beach managed to score its second consecutive year at the top, beating out a number of firm favourites including Newquay’s Fistral Beach and Dorset’s famed Weymouth Beach.

So if you’re planning to head to England’s South West this summer, lucky you! And if you’re still undecided as to which beaches to grace with your presence during your stay, the following six scored extremely highly with the TripAdvisor public: 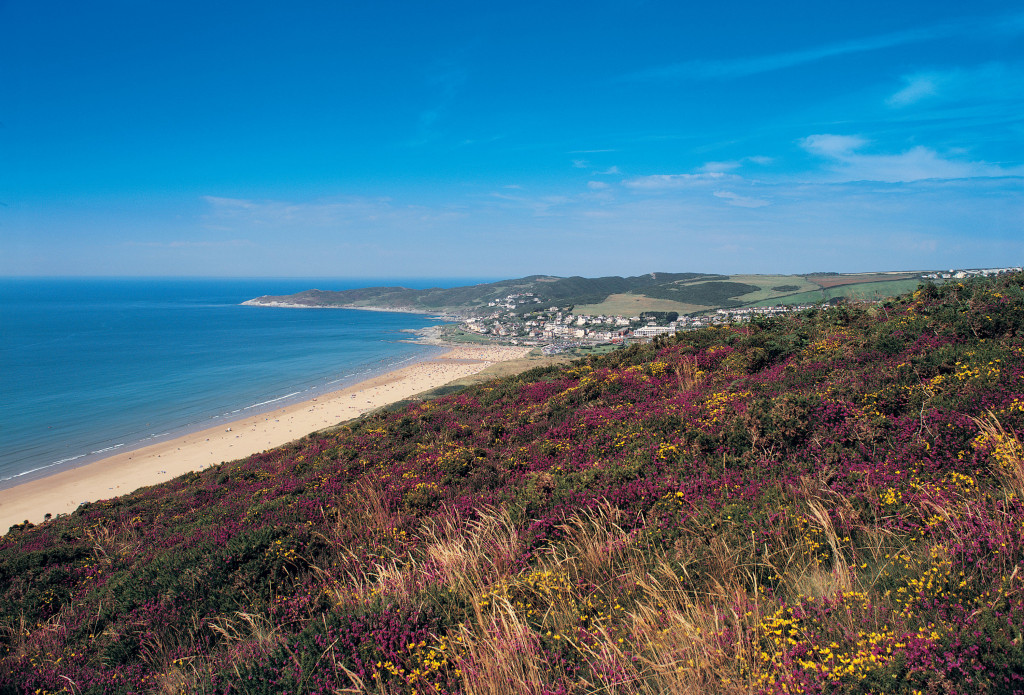 The undisputed champion of champions, Woolacombe Beach has for the second year running earned its rightful place at the top of the pile. In terms of what exactly it is about Woolacombe Beach that makes it stand out from the crowd…well, let’s just say this is a question only ever asked by those who haven’t paid it a visit!

First of all, the fact that Woolacombe Beach stretches on for incredible three miles makes it an absolutely fantastic choice for families. Even at the very busiest times during the season, it is never too difficult to find yourself a gorgeous spot with plenty of space. It just doesn’t have the same cramped and crowded feeling as so many other coastal summer hotspots – time your visit strategically in the springtime and you might just have a place all to yourself!

Woolacombe Beach is also one of the most iconic surfing hotspots in the whole of the United Kingdom and has a strong contingency of resident surf schools. Local amenities are simply fantastic and family friendly accommodation options are endless. Woolacombe Bay Holiday Parks in particular never fail to generate rave reviews, located right next to the beach with a multitude of accommodation types – including luxury lodges with hot tubs! And when it comes to dining on the most outstanding local goodies, Woolacombe Beach is flanked on all sides by delightfully decadent eateries the whole family will love. 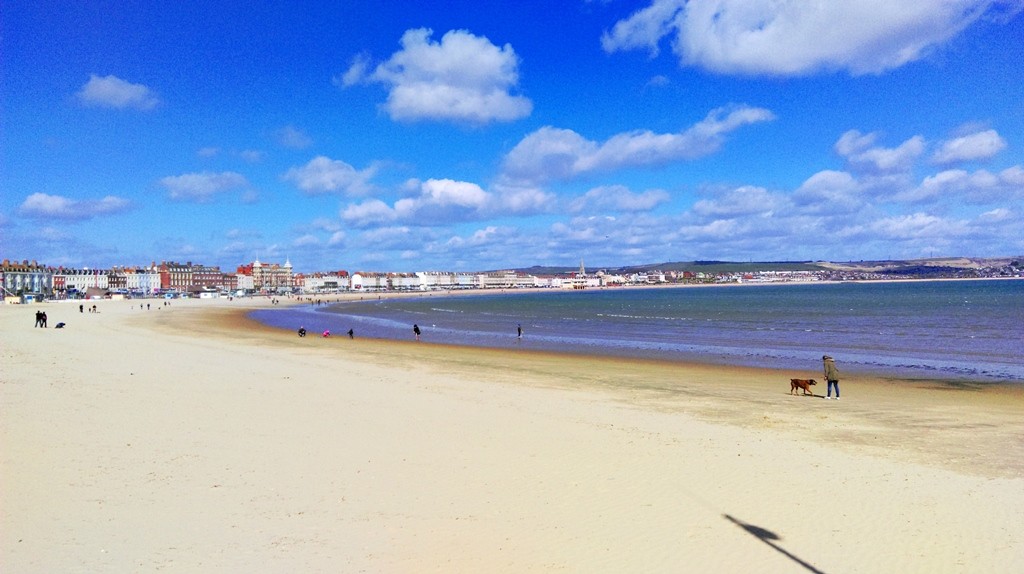 Undoubtedly, a strong contender for the top spot this year, Weymouth Beach likewise serves up absolutely everything any family could wish for as a location for a summer holiday. Once again, Weymouth Beach offers no less than three straight miles of golden sands and bracing blue waters, meaning there is always plenty of space available even at the height of the peak season. The beach itself is kept in the most beautiful in pristine condition at all times and the resident lifeguard contingency makes for a beautifully safe environment for the whole family.

One of the biggest points of appeal for Weymouth Beach is the way in which this extraordinary stretch of sand is located just a short hop from the historic town centre. The town itself is absolutely stunning and deserves comprehensive exploration, as does the beautiful local port which is likewise located extremely close to the beach. The views from Weymouth Beach in every direction are simply spectacular and there are endless walking opportunities both across the bay and inland. A simply superb summer holiday location for families. 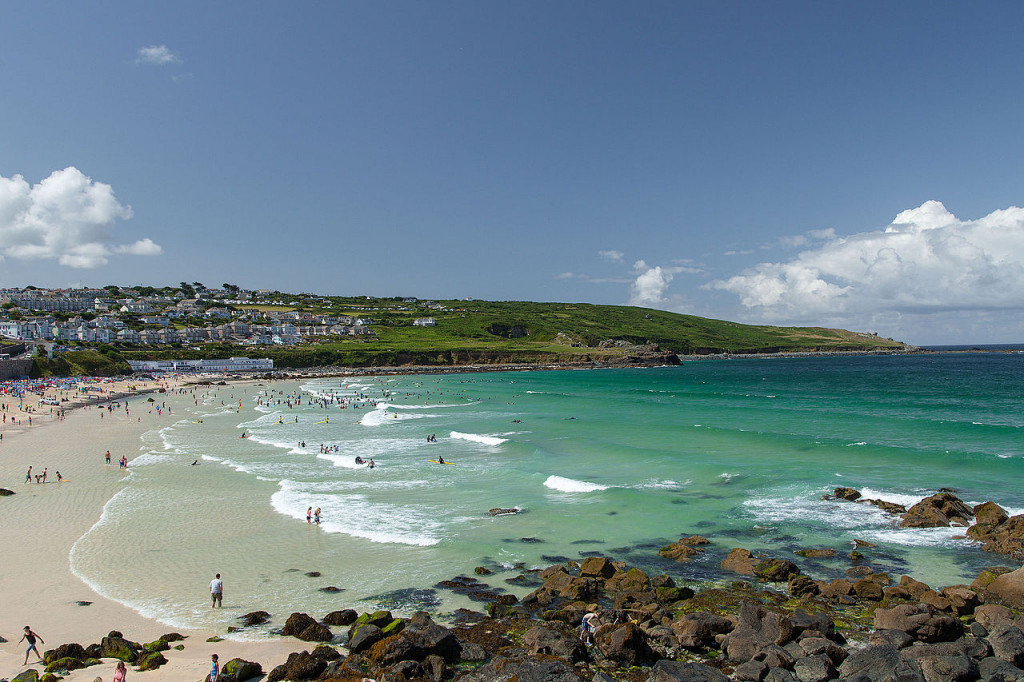 Quite rightly considered the single most stunning beach in an area blessed with more than its fair share of stunning beaches, Porthmeor Beach is an absolutely breathtaking sight to behold. The quintessential example of a traditional Cornish village blessed with the beauty and majesty of an extraordinary coastline, Porthmeor Beach is nothing short of a picture postcard snapshot of perfection.

Local amenities are certainly not in short supply and as one of the most popular and important surfing locations in the whole country, there’s really no better place to strap on a wetsuit and take your first lesson. The beachside café is the stuff of legends and even when the weather isn’t particularly spectacular, there’s a world of entertainment waiting to be discovered just a stone’s throw from the sands. 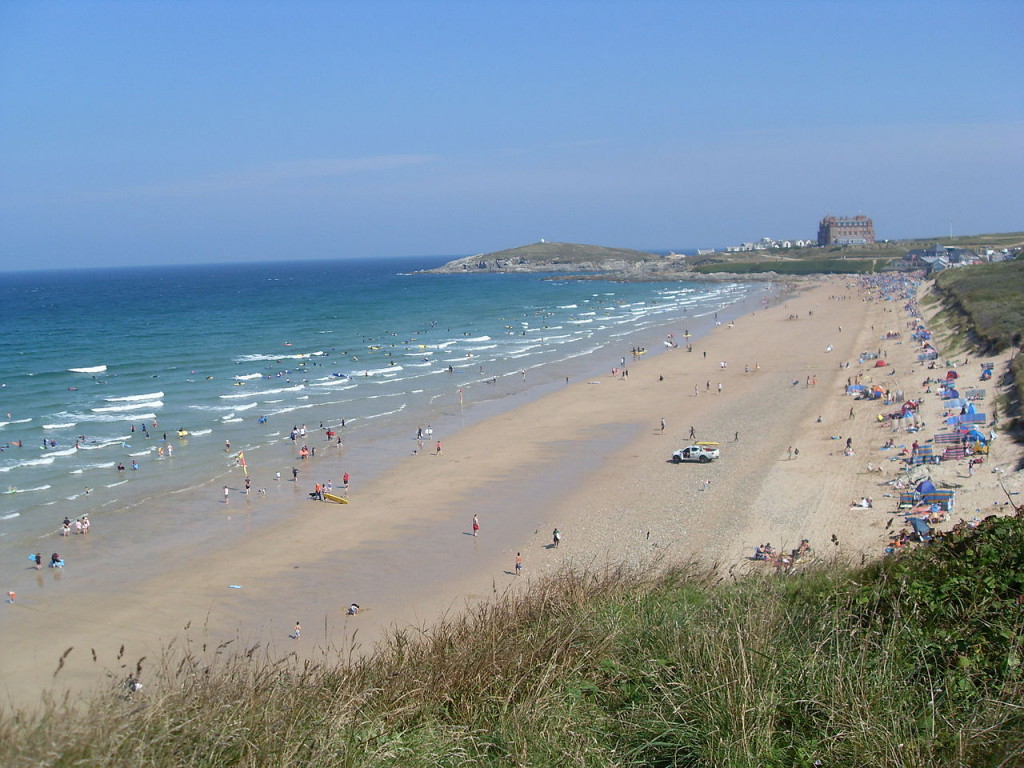 The word ‘iconic’ just doesn’t even begin to describe Newquay’s world famous Fistral Beach. This spectacularly popular stretch of sand hosts an extraordinary variety of enormous events throughout the summer, including the annual Boardmasters Festival. But then again, as the single most famous and popular surfing beach in the whole of the United Kingdom, where else would such a prestigious event be held?

Throughout the year, there’s an incredible buzz about Fistral Beach which you will only understand if you have spent time in Newquay. In many respects the UK’s answer to Las Vegas, Newquay as a whole is a place people head with one thing and one thing only on their minds – fantastic times! Unsurprisingly therefore, the place has become a mecca for British and European tourists alike and has more amenities packed into it than you’d expect from a dozen seaside resorts combined. Fistral Beach itself is extraordinarily well looked after and has more than enough nearby dining opportunities and accommodation.

Take the time to visit Fistral Beach for the sunset and you’ll immediately know what all the fuss is about! 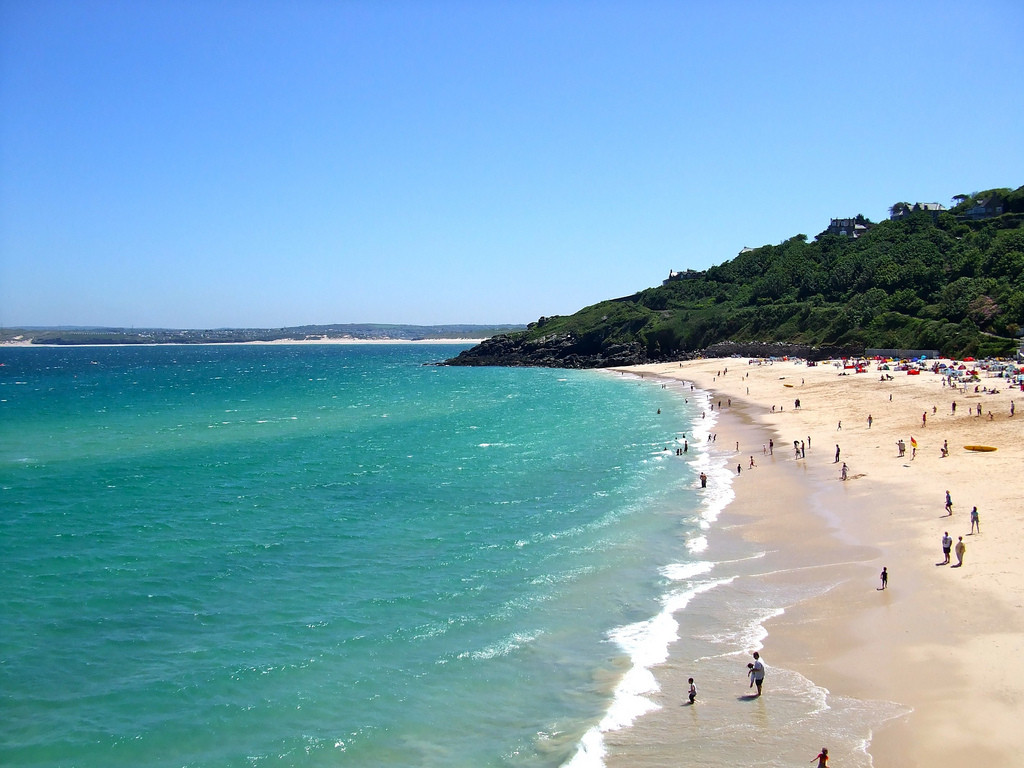 Another entry for St Ives, Porthminster beach may be much smaller than some of its rivals, but in terms of pure enjoyment packs a punch like you wouldn’t believe. It has the kind of characteristic beauty and tranquility that lets you know in an instant that you really could only be in St Ives – these guys really are spoilt rotten when it comes to beautiful beaches!

Porthminster beach is a tale of traditional charm and tranquility, which never fails to make visitors feel as if they have somehow been transported back in time. The fact that Porthminster beach is only in the region of 0.5 miles in length means that it can occasionally feel a little on the crowded side during the busiest times of the year. Nevertheless, this is precisely the type of beach that well and truly comes into its own when visited at a strategically quiet time. Both late spring and early autumn certainly qualify as exactly such times, when the weather is still quite beautiful and you stand every chance of having the whole place to yourself. There’s a wonderful restaurant nearby and a gorgeous café which boasts incredible views out into the bay.

And of course, the beach itself is kept in truly spectacular condition at all times. 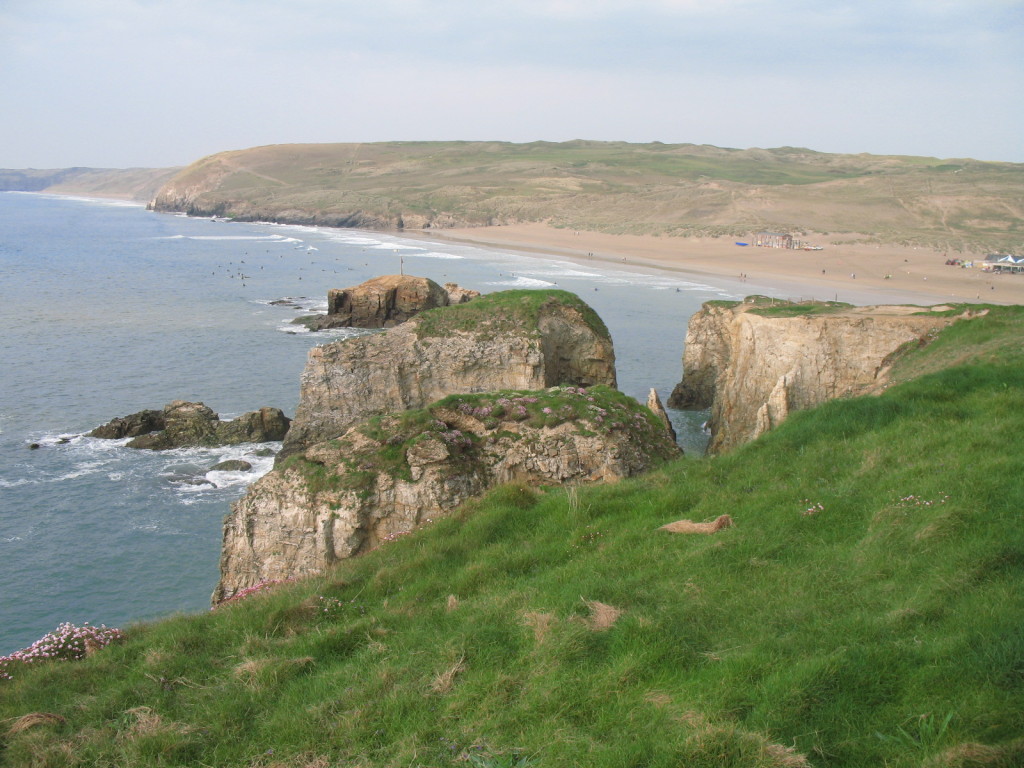 Last but not least, Perranporth Beach represents the heart and soul of the town bearing the same name. Perranporth is an absolutely stunning little town and represents the ideal base from which to explore the very best of everything Cornwall has to offer. But at the same time, with an incredible three-mile stretch of breathtaking beaches right there on your doorstep, you’ll probably find every excuse in the world not to bother travelling very far at all!

Perranporth Beach has a longstanding reputation up and down the United Kingdom as one of the country’s best places for snorkeling, sailing, surfing and generally soaking up the sun. The water quality is simply unrivalled and the scenery in every direction is beyond breathtaking. The sheer scale of Perranporth Beach is such that it is never difficult to find plenty of available space even at the height of the season, when most comparable beach hotspots would be feeling rather congested to say the least.

The surrounding cliffs serve up an extraordinary array of wonderful walking opportunities and there is absolutely no disputing the fact that Perranporth Beach is one of the best places in the country to take in the sunset. Local amenities are endless and the seasonal lifeguard service makes for a wonderfully safe and enjoyable family summer holiday experience.

You can view a full list of the 25 best beaches in UK, Europe and Worldwide (or you can choose by region) on the Trip Advisor website

And there you have it – some supremely strong arguments for taking the time to discover the extraordinary beauty of the United Kingdom this summer. It’s really not until you experience the true delights of a classic British family holiday that you begin to understand why the ‘staycation’ is becoming the latest summer holiday trend to sweep the nation.

With these kinds of world-class delights right there on your doorstep, why bother going anywhere else?