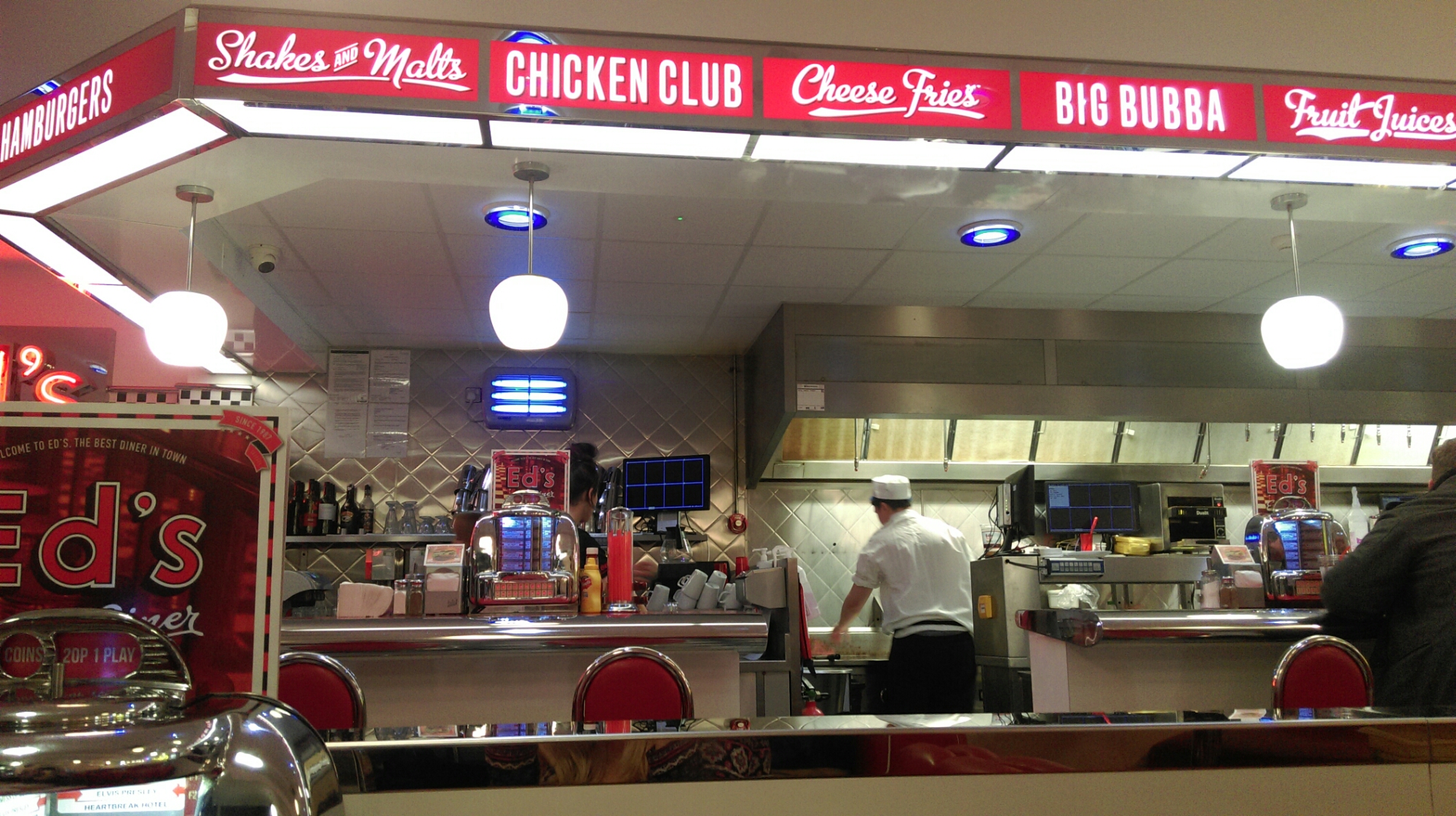 After a very disappointing first visit to Ed’s Easy Diner at Gloucester Quays, I decided to give it one more try before writing it off. The first visit included raw chips, stale bread, small portions and non-existent customer service, but after reporting it on their website, I received a swift apology and a goodwill voucher (less than the amount I’d spent, but it was enough of a gesture for me to give them another go). 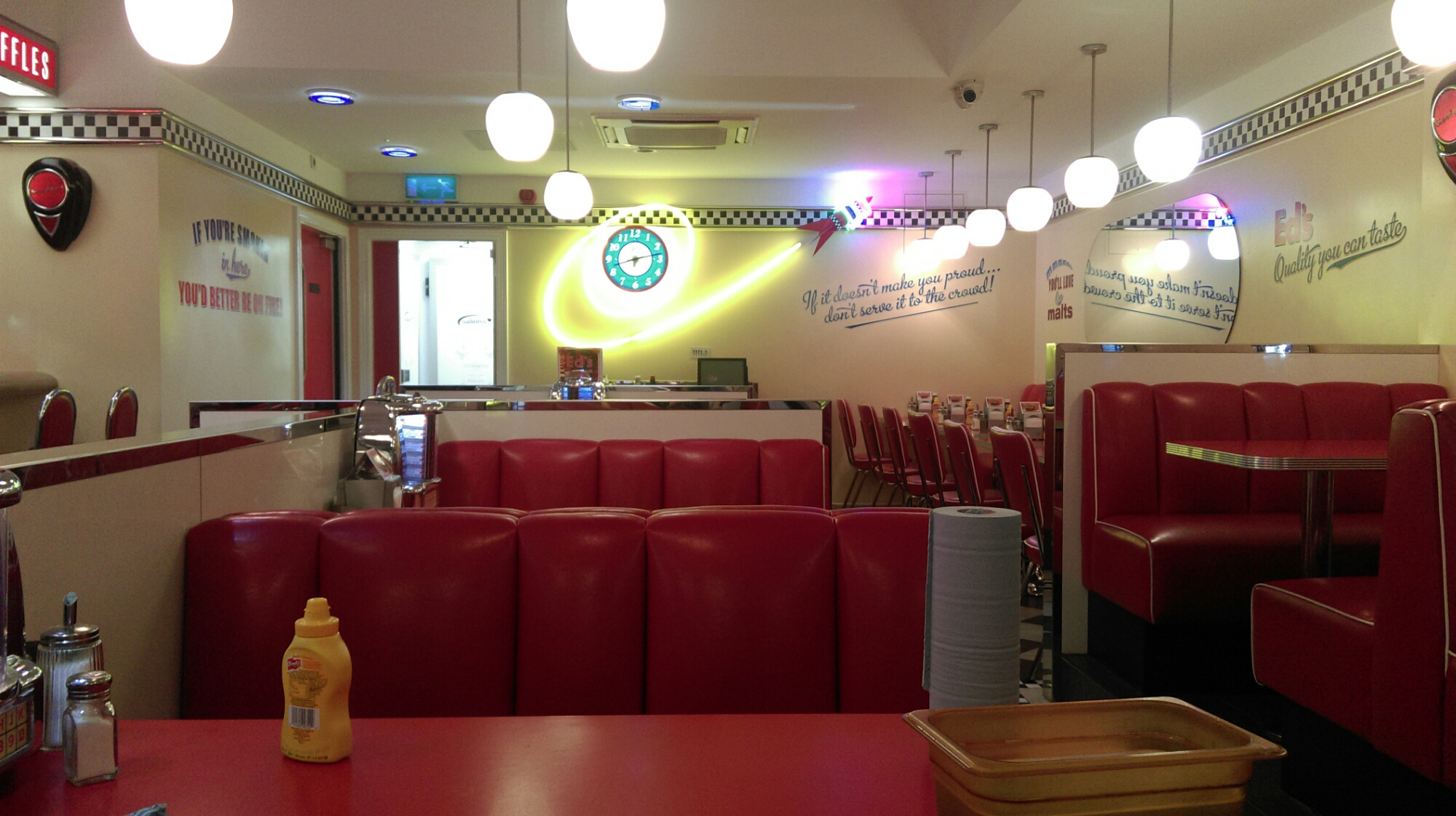 On the second visit, we were greeted with a very warm welcome, seated in a booth and our server explained the menu to us. We were offered highchairs, but declined as the twins were old enough to sit nicely in the booth. The children were given menus to colour in, crayons and chef hats. 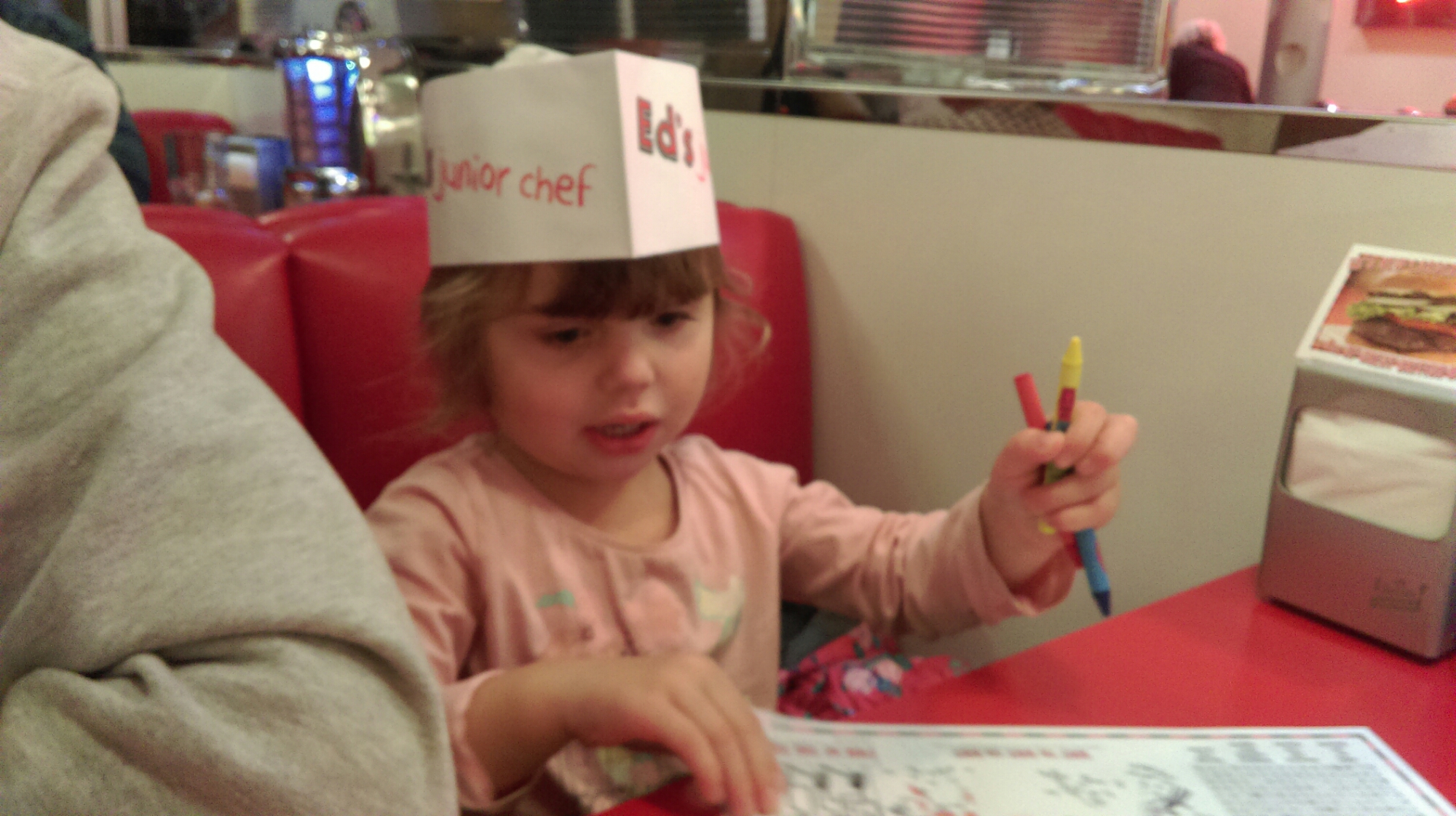 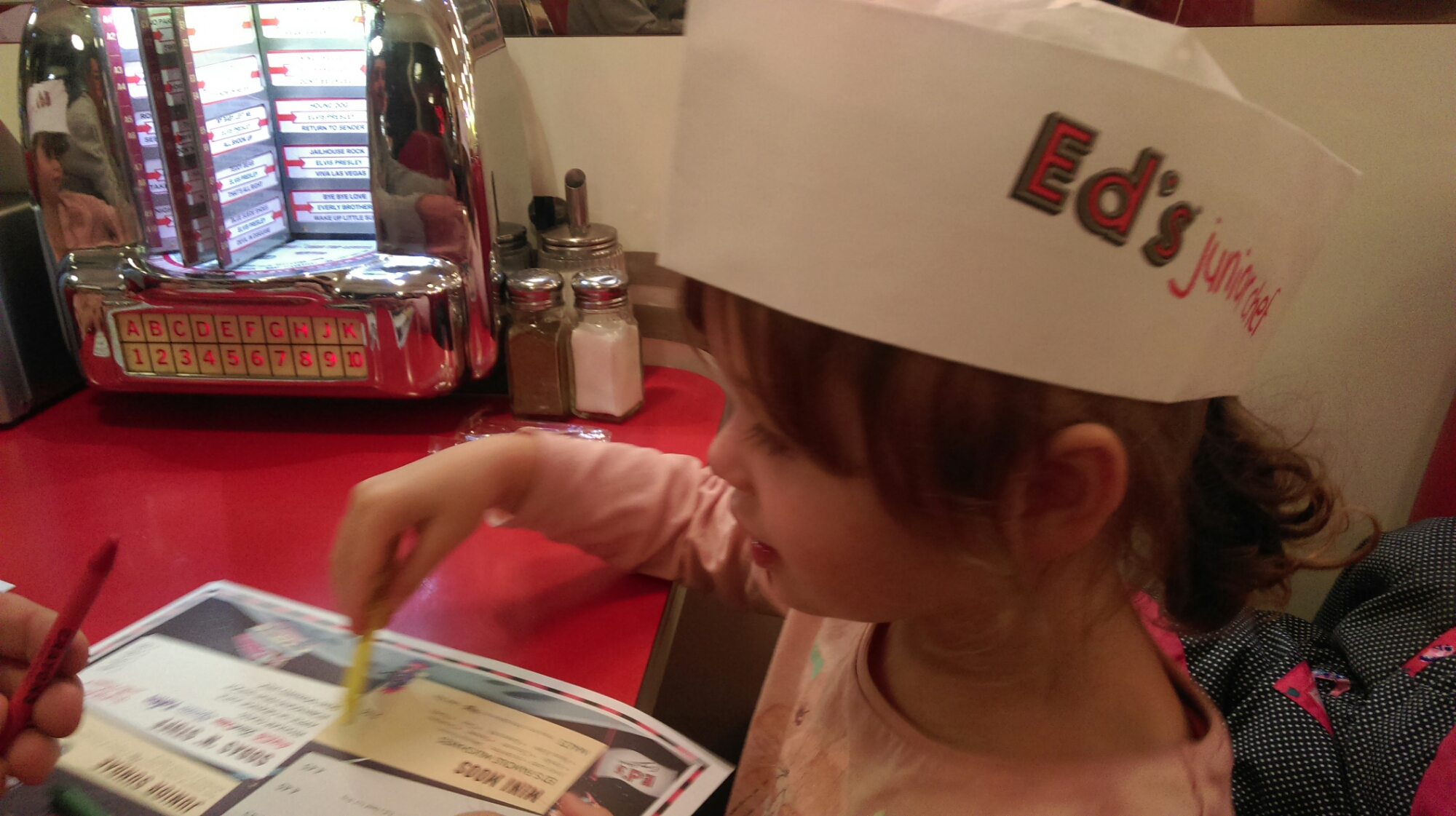 We all loved the atmosphere and the decor inside Ed’s, particularly the individual juke boxes on each table. I’m an Elvis fan so I put a few coins in and filled the diner with the epic sounds of the King. 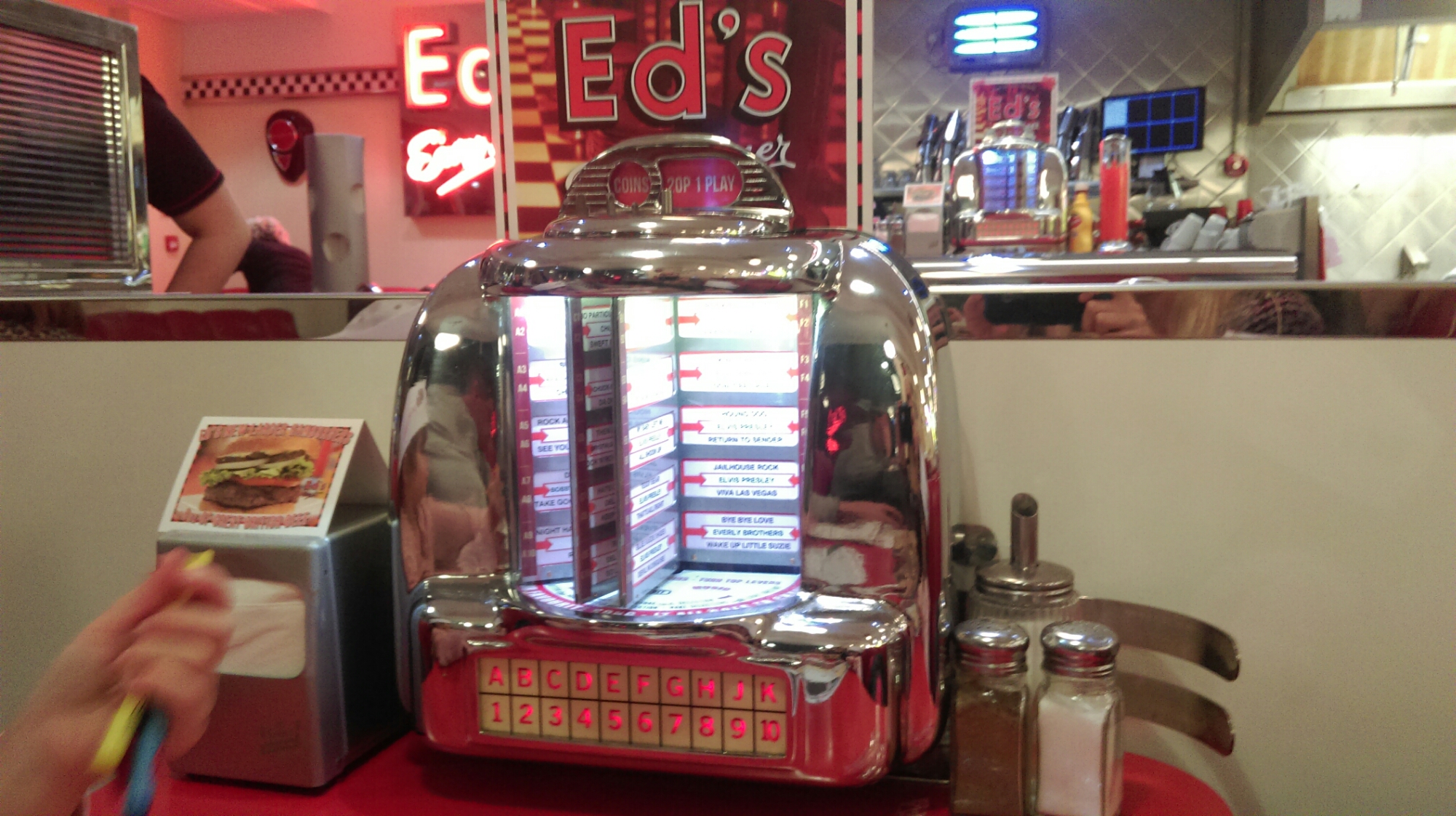 We chose soft drinks with unlimited refills, although I had previously tried the root beer, which was nice and if I’d had room, I’d have tried the milkshakes. 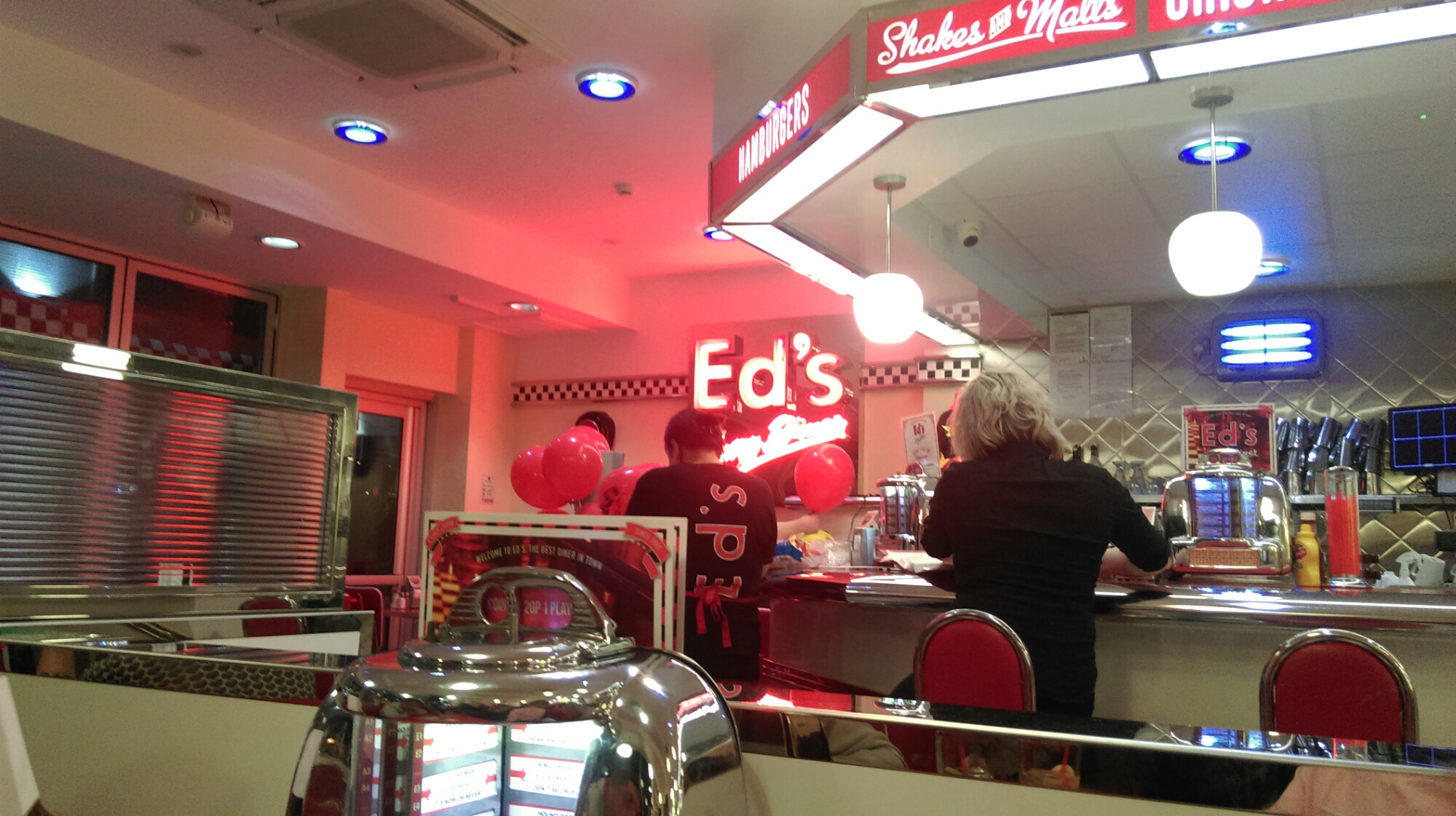 I ordered a chilli dog as an “Ed’s plate”, which means it comes with “chunky chips”, onion rings and coleslaw. 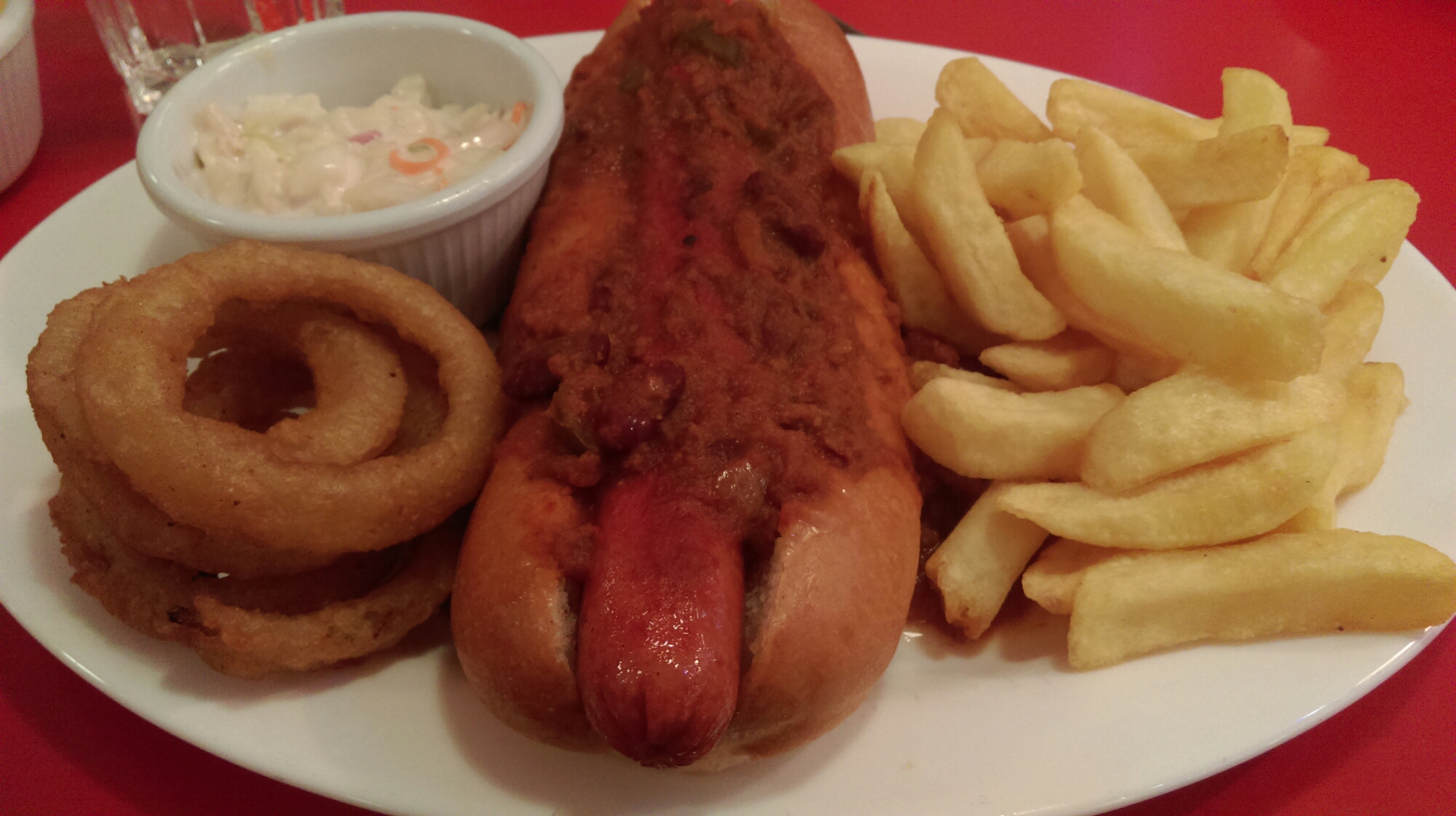 I can’t say there was a particularly generous amount of chilli, though the sausage itself was spicy and tasted great. It was all cooked well and the bread was much fresher than our previous visit. The chips were just ordinary chips, so the “chunky” description was lost on me. 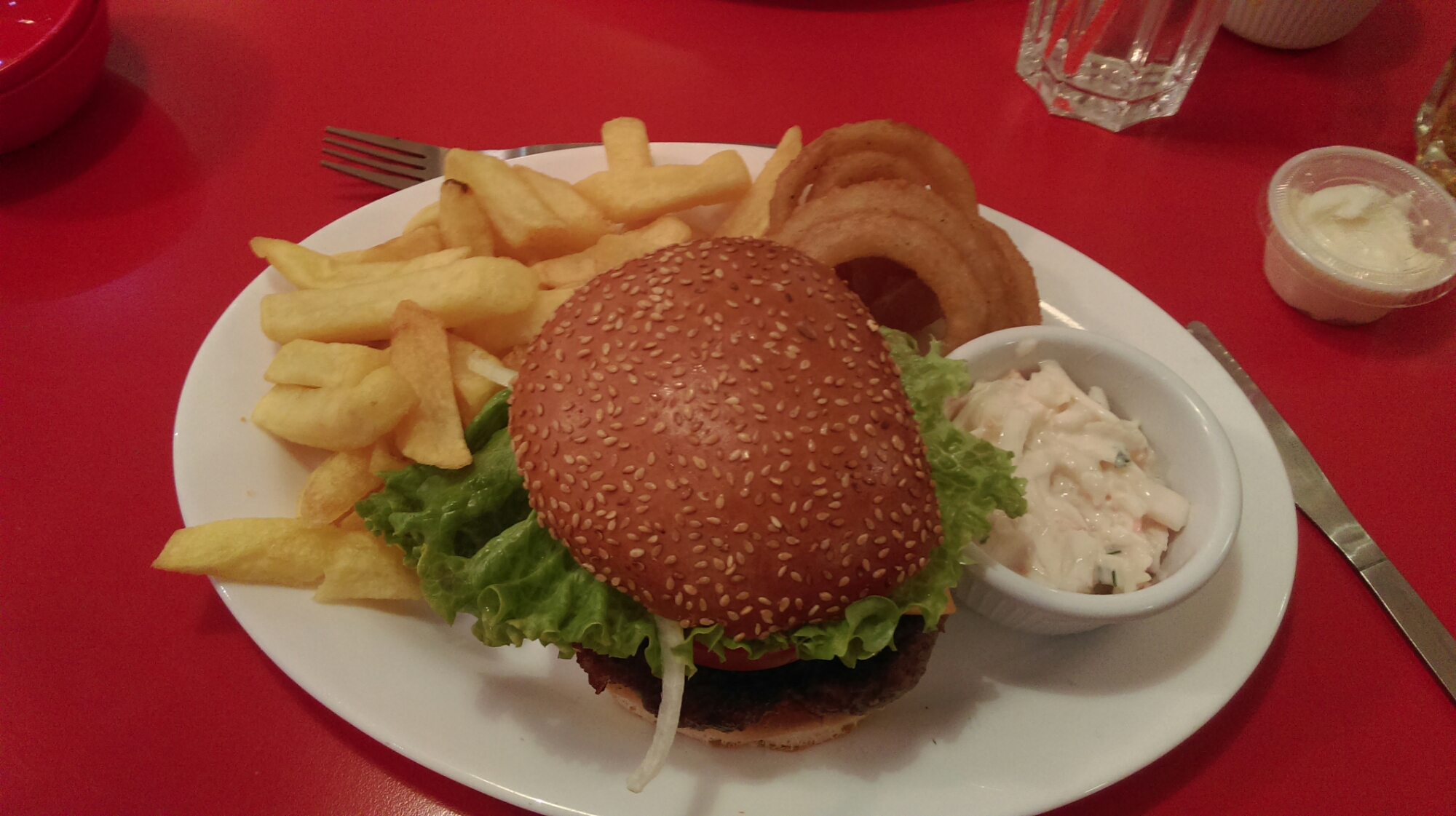 He enjoyed his burger and there was a good amount of food, however he didn’t think it warranted such a high price tag of £13.85. 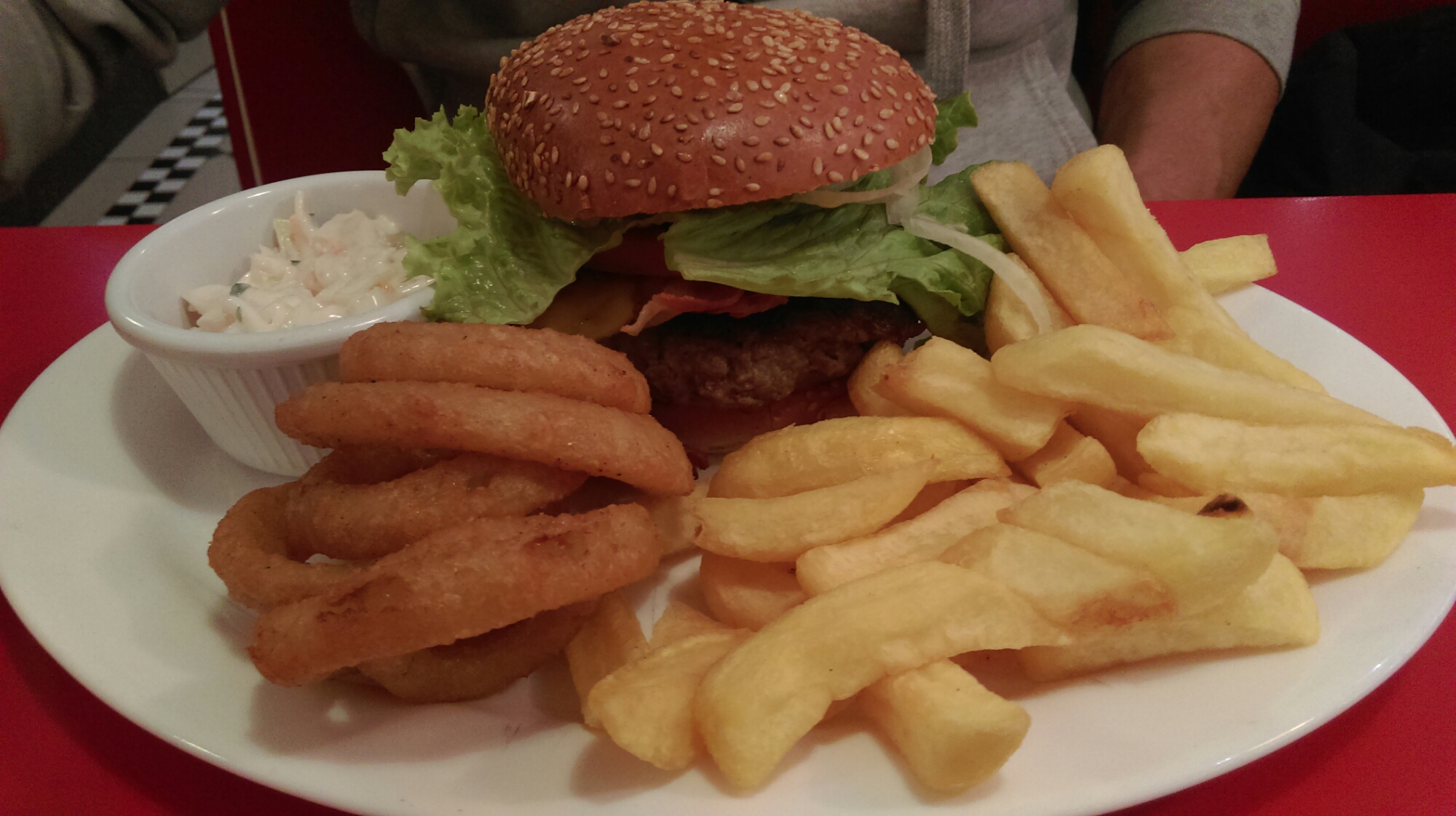 The children’s meals we chose were chicken tenders, which were simply 3 pieces of chicken and a very small portion of chips. No side order, veg, salad, drink or dessert included. We felt that this was not good value for money due to it’s £4.45 price tag. 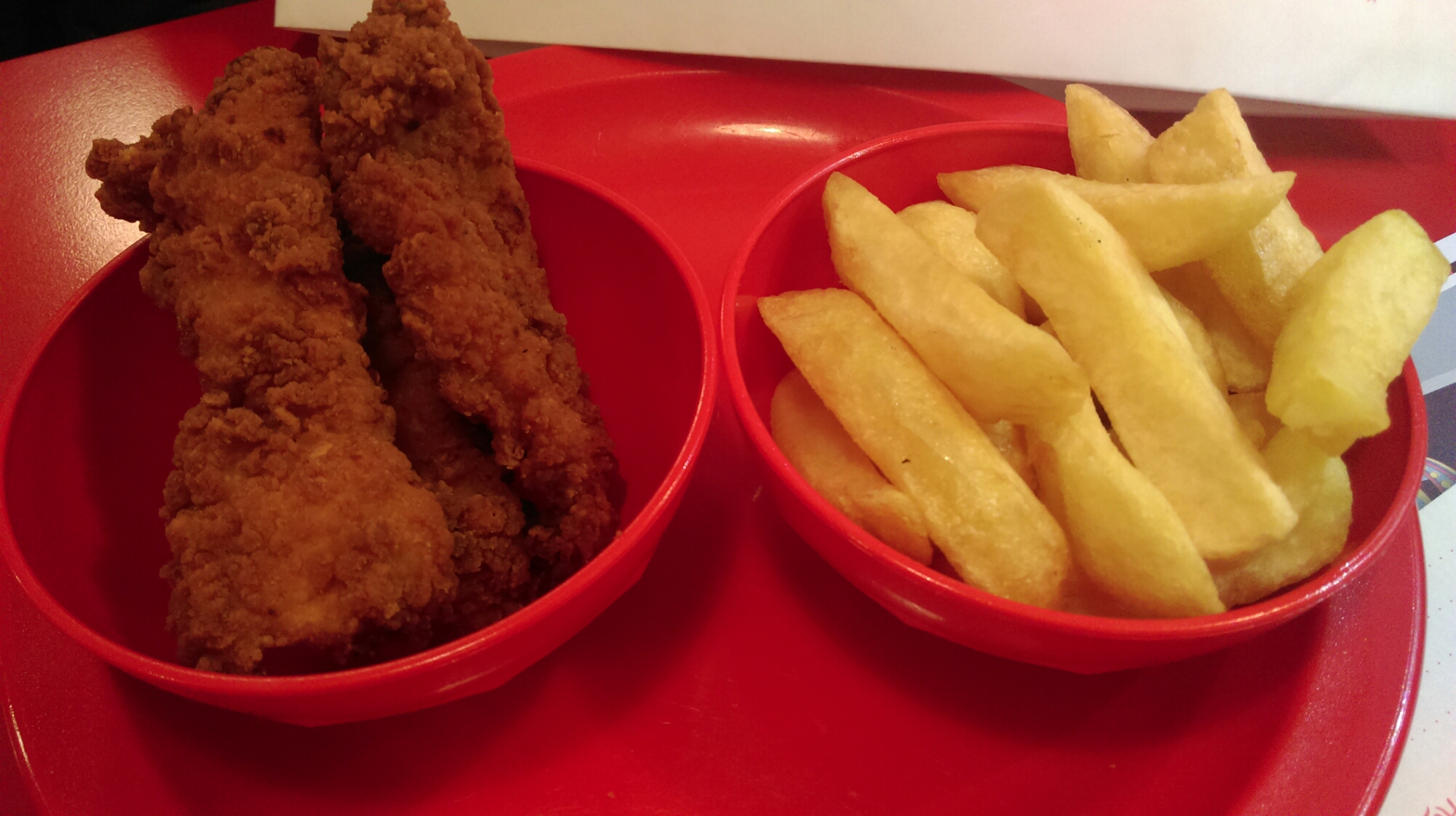 My two year old twins enjoyed their food, but were still hungry afterwards.

At Ed’s Easy Diner, it very much feels that you are paying for the experience, rather than the food. The decor, the atmosphere, the American feel was all fantastic. The quality of the food was average at best. The server forgot to bring a side order of cheese sauce that I’d ordered and she brought me diet coke with ice, when I’d ordered lemonade without ice. On the whole, service had improved from my first visit.

Would I return to Ed’s Easy Diner again?
Maybe for a milkshake or a root beer, but not for food.