In 2014 we went to Ladram Bay in Devon, just for one night at the end of the season as I was judging their end of season talent competition. I wish we’d been staying longer, but we had literally just stepped off the plane after a week in Lake Garda, Italy. The caravan we had at Ladram Bay was 100 times nice than the Eurocamp caravan we’d been stuck in in Italy so we really could’ve done with a week here too!

Even at the end of the season, Ladram Bay looked beautiful, so I took this photo from the clifftop just as the sun was going down. 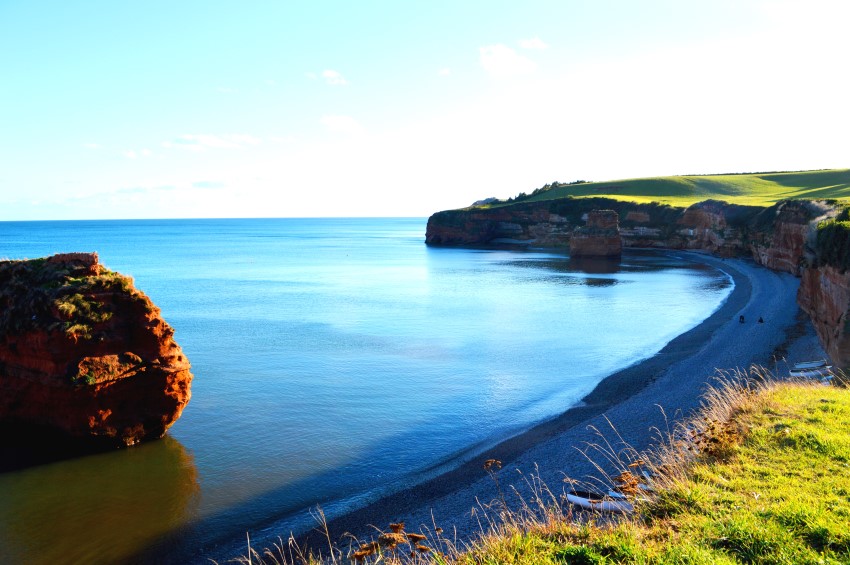 Regular readers will know that I’m a huge fan of the sea. In this photograph, I love the stillness of the water, the shadows from the setting sun and the way the grass is illuminated and almost glows. For me it’s a picture of warmth and serenity. Not bad for an October evening in Britain!

Thanks to those who joined in with the last #CheckOutThatView linky. I love that all the photos seemed to tell a story in pictures and I really appreciate the variety of the photos people are linking up now. Remember if you want to join in with #CheckOutThatView then posts can be travel reviews, a single photo, a storyboard, part of another linky or part of any kind of blog post, as long as it contains at least one photo of a pretty view. A few people have even started linking up Instagram photos. The aim is just to share the love of beautiful places.

Don’t forget to visit at least two other links and leave them a comment, it’s what makes these linkies work.