I thought it was about time I wrote about our GO Outdoors tent disaster. You may have seen some of the kerfuffle on Twitter a few months ago. This is not my first tent disaster, as you may well know if you read the post I wrote a few years ago on my top 5 camping disasters. This time however, was not our fault (and this tent disaster tops them all, as we couldn’t just laugh this one off)!

Back at the start of summer, Mike and I went out and invested in a brand new tent and all new camping equipment, so that we’d be able to enjoy a few family camping trips over the summer. We bought the majority of our kit from UK retailer GO Outdoors, in their Gloucester branch. GO Outdoors showcase their tents in their indoor “tent field”, where all the tents are erected, so you can walk in and check them out. We chose a large 6 man tent, which was a ‘Hi Gear Sienna Eclipse 6’, because we liked the size and layout. We also liked the two bedrooms and the fact it was built with sturdy steel poles instead of flimsy poles (see my story about camping in a storm!).

I wanted to make sure I was buying the correct items instore, so I approached a member of staff for help. A friendly chap, who appeared to be looking after the tent field, came over to help. I asked him which bundles I needed to put in my trolley, to buy this particular tent. He picked up a large blue bag and put it in my trolley for me. He handed me another bag containing the tent carpet. I was surprised that such a big tent fit into one bag, so I asked him, “Are you sure that’s everything I need for the tent, just in this one bag?”. He assured me that was correct. Trusting his expertise, I continued my shopping, buying airbeds, camp beds, foam mats and a variety of other camping accessories.

Double and triple checking we had bought everything

When I finally reached the checkout, after spending an inordinate amount of time in the store, I just wanted to double check. I asked the lady on the checkout, “Is absolutely everything I need for this tent, in just this one big bag?”. Her reply was that she was new, so she’d check with the “tent expert”. Another man (different to the first one I’d asked) looked in my trolley and said, “yep, that’s it”. The bag was pretty heavy, so I realised it must just be really well packed. Having never bought a tent before, what would I know? I spent a small fortune (several hundred pounds) in that one trip to GO Outdoors. I went back a few days later and bought even more accessories, spending another few hundred pounds.

Our mini camping trip to test out our new tent

We phoned up and booked a last minute 2 night camping trip, to test out all our new equipment, before we booking a longer camping trip. We booked an electric grass pitch at Lady’s Mile in Dawlish Warren, Devon. Having just gotten back from a camping trip with their dad, my children were super excited.

Our journey to the campsite in Devon, should have just been two hours, but unfortunately due to bad traffic, it took us three and a half hours. We arrived at the campsite feeling tired, hungry and just wanting to pitch the tent as quickly as possible, so that we could go and find the restaurant for dinner. After we checked in (check-in was smooth and easy) and found ourselves a pitch, we unrolled the tent from the tent bag…

…And found that there was nothing else in the bag. No bedrooms. No poles. No tent pegs. Nothing. Just the outer shell of the tent.

In a state of panic, I Googled the nearest GO Outdoors store, in Exeter, and called them. They told me that the store was closing in 20 minutes but that they would do all they could to try and find a solution. I told them that I could get there in 20 minutes, but they insisted I should wait until they’d spoken to the manager. As after all, “this situation was Gloucester’s cock-up, not Exeter’s”. The second person we spoke to, seemed far less sympathetic and I got so upset that Mike had to continue the call.

I would have accepted any solution, even if it was just to borrow a tatty old ex-display 4 man tent until the morning. After the long journey here with excited children and now the looming dark, I just wanted somewhere to sleep, rather than having to drive all the way back to Gloucestershire. Despite keeping us on the phone for an hour (past store closing time), in the end, they decided that there was nothing they could do to help. We were told that they didn’t have our tent in stock and didn’t have a display model either. I was in tears. My husband was angry. My children were a combination of upset, hungry and fearing us having to take them all the way home again.

I took to Twitter about our tent disaster, as I frankly, didn’t know what else to do. Overwhelmingly, I received an immense amount of support from my followers. It wasn’t just retweets and well wishes either. Three very kind, selfless people from Devon, each offered to loan me a tent. One incredibly generous follower, offered to drop everything and drive for an hour, to bring us her tent. My first tweet received 69 retweets, 755 engagements and made 17,708 impressions. I was blown away by the kindness of others, wanting to help us, whilst we were fearing about where we would sleep for the night, with four children in tow. 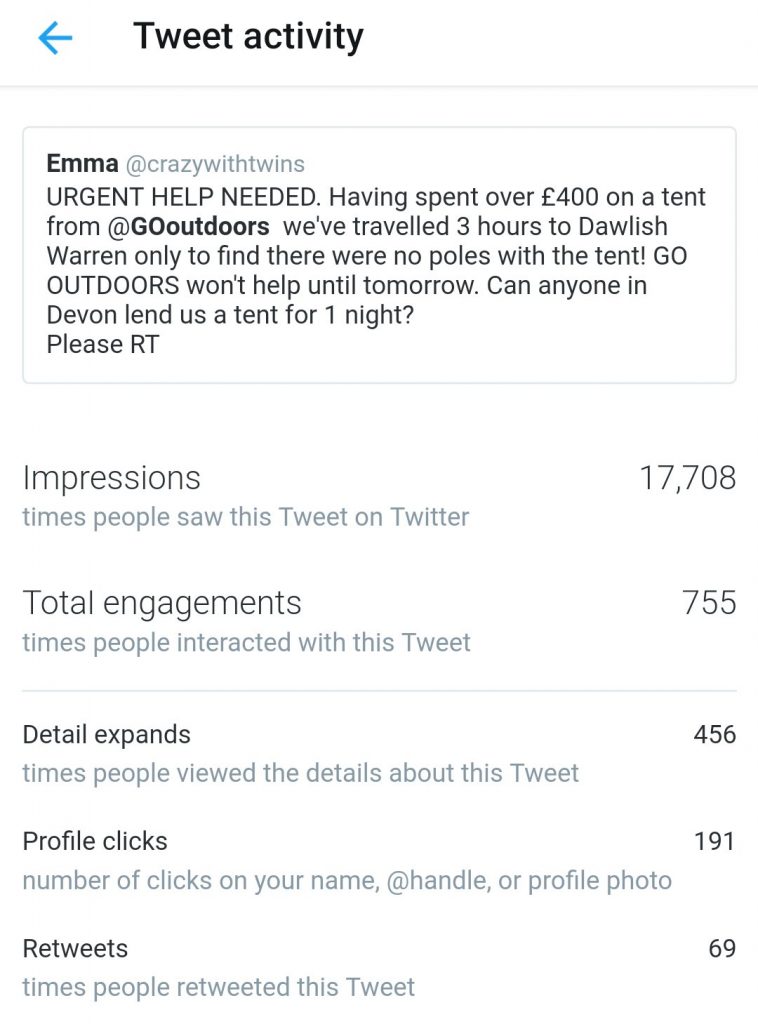 A place to sleep

In the meantime, we had been up to reception at Lady’s Mile and in a somewhat panicked state, I explained our situation. The two ladies behind the desk at Lady’s mile (I think their names were Jill and Emily) managed to find us a solution. They very kindly offered us a caravan for the night at a heavily discounted, emergency rate. £50.00 later, we were in a Sycamore caravan, feeling very relieved, despite the fact we’d technically paid for both camping and a caravan for that particular night. We’d also lost a good few hours of our holiday to stress and tears and had only solved the problem for one of two nights. It also meant we weren’t really able to enjoy the first night of our trip, as we were still stressing over the tent and the next night.

The following day, we were checked out of the caravan and at Exeter GO Outdoors the moment it opened. Having checked their website, we discovered that there were actually two of our tent, in stock and available to reserve! As we walked through the door, one of the managers, was standing there anticipating our arrival. She appeared to be bracing herself for the wrath of an unhappy family, but we kept our calm. We understood that she wasn’t the cause of this tent disaster, she was (hopefully) there to help fix this. The lady introduced herself as Sarah and gave us one almighty apology on behalf of GO Outdoors as a company (rather than shifting the blame to the other store). Our tent was in fact in stock, as two of them were already up in their tent field (outdoors). Why didn’t the staff we had spoken to on the phone, just give us the missing parts from one of the demonstration tents? We could have easily gotten there before they left for the evening.

Sarah, took us outside and got a colleague (Gareth) to help her take down one of the display tents and package up all the parts we were missing. She gave us a voucher for £20 to use in GO Outdoors and told us that she had spoken to the manager of the Gloucester store, who was mortified. Gloucester’s manager was apparently waiting to hear from us on our return. She would discuss compensating us for our losses as a direct result of this whole tent disaster. Sarah temporarily restored our faith in GO Outdoors.

Trying to make the best of it

By time we got back to the campsite, it was lunchtime on the 2nd day of our trip and there we were, pitching our tent. By time we’d pitched the tent and set up everything the way we wanted it, it was gone 2pm. We made a quick lunch and headed to the pool, to spend what little time we had left to enjoy the facilities. I can’t honestly say that this was a good trip. Lady’s mile was fantastic. The customer service and the facilities were brilliant, but we had barely any time to enjoy it. Only 18 hours after putting up our tent, it was time to take it down again. The next day, we had to visit the local area with all our stuff in the car. Essentially we’d had a whole day and night of our trip taken away from us. 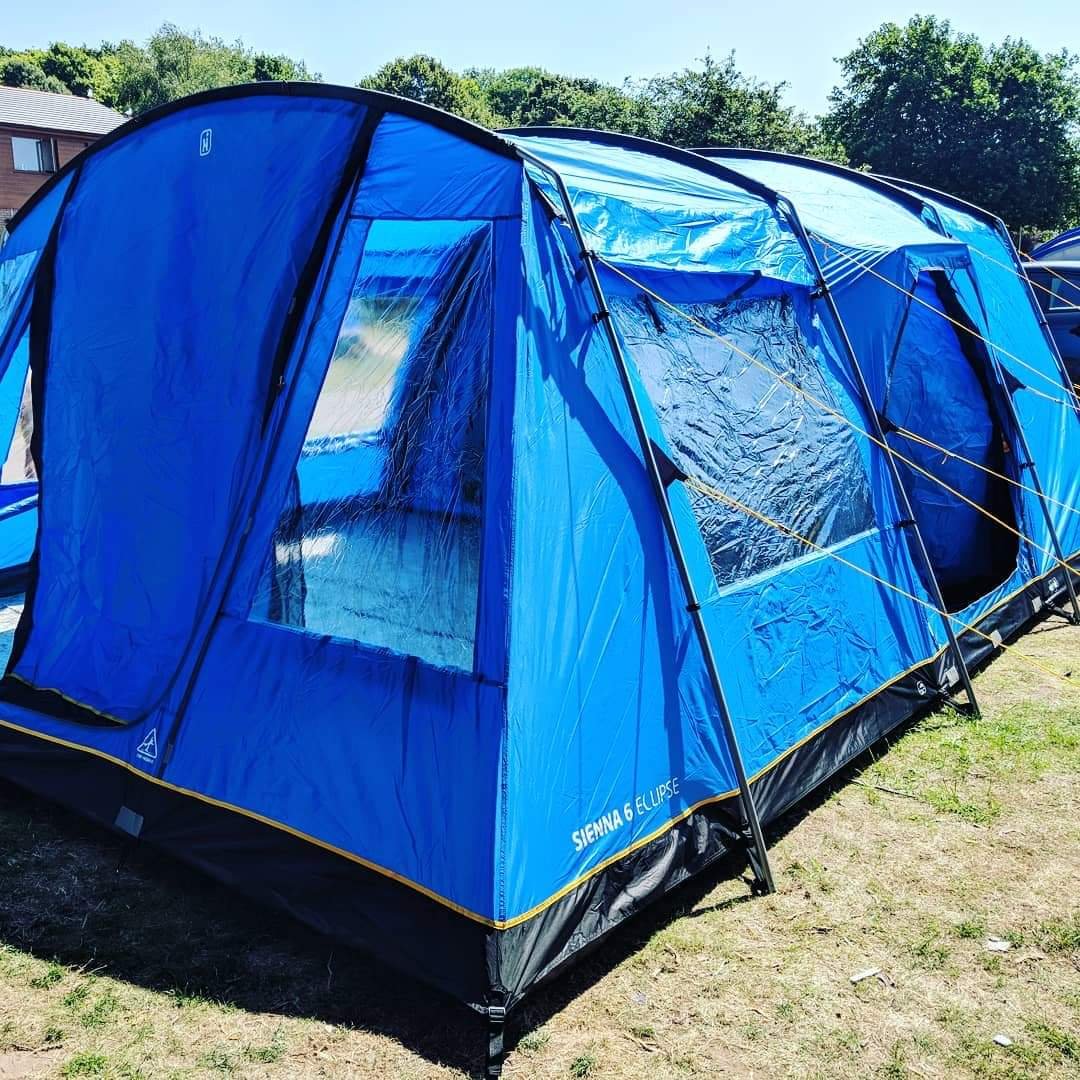 We paid £193.00 for our “two nights” camping (not including equipment of course), which realistically was one night camping. Also, we spent another £80 on Diesel to get us there and back, by time we added on the trip to Exeter and back. It ended up being a rather expensive, wasted trip, thanks to the tent disaster.

I had specifically asked those 3 members of staff at Gloucester GO Outdoors if the tent bag contained everything I needed. They had all agreed yes. I questioned it to avoid any tent disasters and what did we get… a tent disaster which ruined our trip.

We’ve been camping one more time since, but the whole experience has put us off camping completely now. We just keep reflecting on the upset of that trip. It has sucked the fun out of camping for us.

On returning to Gloucester, we asked to speak to the manager of Gloucester GO Outdoors. Afterall, our tent disaster was their fault. We were told that the manager we’d been told to ask for, was not actually a manager, so we weren’t able to speak with her. There was no real apology. No compensation. In the end, we were offered a £30 refund to put towards our caravan cost (which was £50) and the whole ordeal was swept under the carpet. As a result, we were left £20 out of pocket for the caravan and lost a nights camping, which we had paid £71.50 per night for. As well as having our whole trip ruined. I don’t consider the £20 voucher for GO Outdoors as recovering our losses, as we weren’t able to pay Lady’s Mile in GO Outdoor vouchers were we?!

GO Outdoors was a shop I once loved and got excited about shopping in. The Gloucester store’s shoddy customer service has put us off returning.

We now shop at Decathlon and Attwoolls Outdoors for all our camping needs.